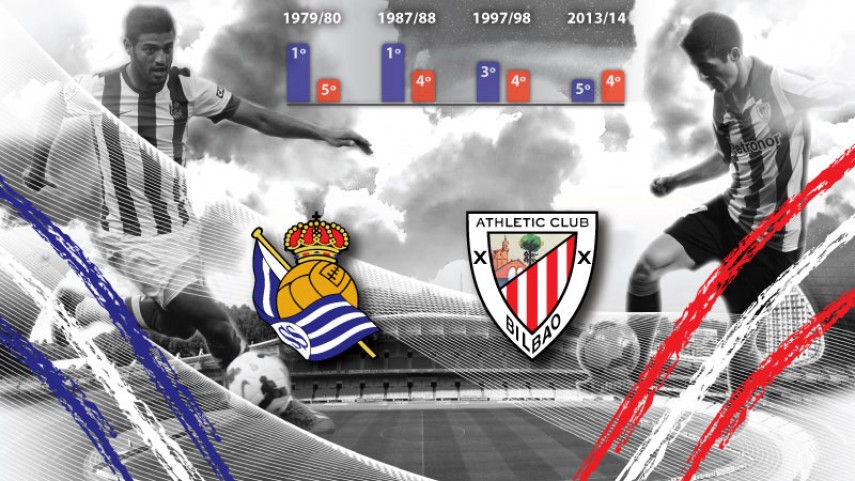 Derby stats and curiosities of the Basque derby

This will be the 132nd edition of the legendary clash between Real Sociedad and Athletic Club and every match has been played in the Liga BBVA.

Behind the mystique that surrounds the derby between Real Sociedad de Fútbol and Athletic Club lie endless statistics and curiosities that make the match even more special.

DID YOU KNOW THAT... Real Sociedad and Athletic have only met four times with both teams in the top five positions?
The rivalry between the two teams is always a great incentive in a match such as this, and even more so when you take into account the fact that the sides come into the game in the top five positions and with just four points between them. It is a situation that, until now, had only arisen on four occasions (1979/80, 1981/82, 1987/88 and 1997/98) and that makes this clash one of the most enticing in the last fifteen years.

DID YOU KNOW THAT... The clubs have not met while occupying Champions League positions since the 97/98 season?
You have to go back to Athletic's centenary year, 1998, to find a derby in which both clubs were fighting for a place in the UEFA Champions League.

DID YOU KNOW THAT... This is the 132nd Basque derby and all of them have been played in the Liga BBVA?
In its 85 years of history, the Basque derby between guipuzcoanos and vizcaínos can boast to have always been played in the Liga BBVA, something that cannot be said of other historical clashes in the competition. Its first edition came on the 10th of February 1929 and, since then, 405 goals have been scored and more than one thousand players have taken part.

DID YOU KNOW THAT... Both Real Sociedad and Athletic won their last Liga BBVA title in a Basque derby?
While a derby is always one of the highlights of any club's season, the event becomes truly unforgettable when the league title is up from grabs against the local rival. This is something both teams understand, as both Real Sociedad and Athletic lifted their last Liga BBVA trophy in a Basque derby. The team from Donostia did so in 1981/82, while the rojiblancos repeated the feat two years later in the 1983/84 season.

DID YOU KNOW THAT... Real said adios to both clubs' old stadiums with a victory?
Real won both of the teams' old stadiums' final derbies. In 1993, in the final derby witnessed by the Estadio de Atotxa, the txuri-urdin beat the Bilbao team 1-0, and last season, in the now-defunct San Mamés, Real Sociedad took three points home the last local derby hosted by the legendary stadium (1-3).