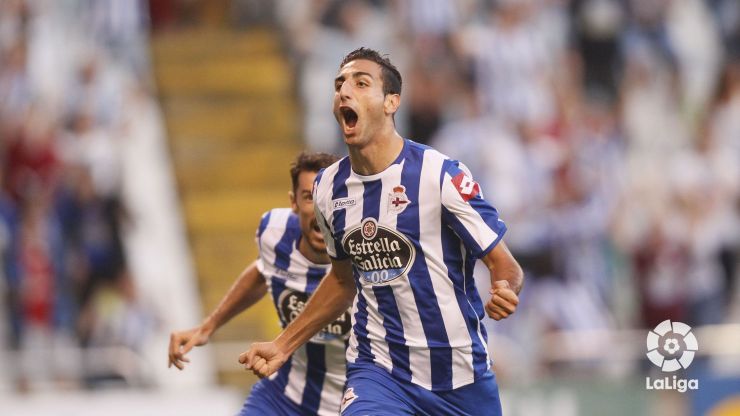 Deportivo dream of getting back to where they belong

It has been over a decade since RC Deportivo de La Coruña earned the admiration of Spanish and European football for their play. At the Riazor Stadium they will always remember the glorious evenings offered by the likes of Fran, Mauro Silva, Roy Makaay, Juan Carlos Valerón, Diego Tristán, Walter Pandiani and none other than Rivaldo, winner of the FIFA Ballon d’Or in 1999.

The times, like football, have changed. Now, in 2014, after alternating between the Liga BBVA and the Liga Adelante, a revamped Deportivo will look to establish themselves in the top flight of Spanish football to find their best form again on the European stage. Not even the tough defeat to Real Madrid has dented their enthusiasm. The man responsible for taking the club to the top again is Víctor Fernández, who will lead a young team eager to perform.

Rediscovering their form is vital. And to do so, the club has looked to sign players capable of restoring hope

Fernández arrived in the dugout at a very young age. At just 30, he became the head coach at Real Zaragoza, a side with which he won a Copa del Rey and a UEFA Cup Winners’ Cup between 1993 and 1995. During his long career as a manager he has won an Intertoto Cup with RC Celta de Vigo, and a Portuguese Super Cup and FIFA Intercontinental Cup during his time at FC Porto.

Rediscovering their form is vital. And to do so, the club has looked to sign players capable of restoring hope. José Rodríguez, Iván Cavaleiro, Hélder Postiga and Isaac Cuenca are some of the new faces in a Galician side that has retained star players such as Germán Lux, Manuel Pablo and none other than Juan Domínguez, the commander in the Coruña midfield and a product of the club's academy.

Hélder Postiga will be the team's front man. The veteran Portuguese striker has forged a career in Spain and, after donning the colours of Zaragoza and Valencia CF, he now arrives at the Galician side to bring all of his experience to lead the attack, accompanied by the youthfulness and irreverence of his fellow countryman and Portuguese international: Cavaleiro. A total of 26 goals in his three seasons in Spain endorse the Blanquiazules' new '9'.

While Postiga will bring goals to the Galician ranks, the spark and fresh blood in the midfield will come from Cuenca, José Rodríguez and an old favourite in Diogo Salomão. When they are together on the field, the three of them will provide balance and penetration, ball control and seniority, a good touch and goal-scoring passes. All under the guidance of Juan Domínguez, the 'natural' successor to Juan Carlos Valerón.

The human resources are in place. The desire is there, too. A season full of challenges is underway. Their reunion in the Galician derby with RC Celta de Vigo in the top flight of Spanish football is one of the big attractions of the 2014/15 campaign in which they will hope to confirm, or rather reconfirm, the status of a battle-hardened team: a side that has played 42 Liga BBVA seasons and won one Liga BBVA, two Copas del Rey and three Supercopas de España.