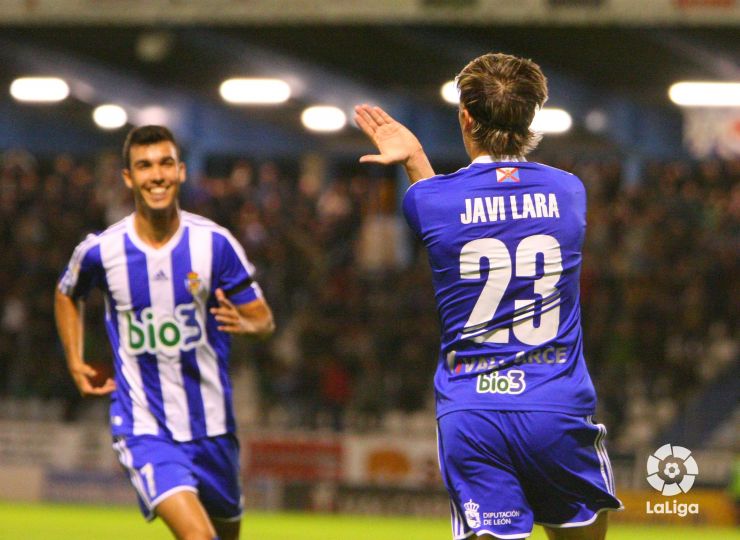 The third and fourth place teams, respectively, remain one point behind Lugo, who occupy second, and six away from the leader, Recreativo, who were defeated by Ponferradina. Mirandés and Sabadell won again.

Matchday 12 of the Liga Adelante once again demonstrated the equality of the teams in the division.
Leaders RC Recreativo de Huelva, after eight consecutive matches without losing, were beaten by an SD Ponferradina who dominated the match from start to finish and are now near the playoff spots after a great win.

CD Lugo are now four points behind Recreativo after an important win against RCD Mallorca, and in second place, which provides automatic promotion. Meanwhile, one point behind Lugo are RC Deportivo La Coruña and UD Last Palmas, who won 2-0 and 1-0 against Real Madrid Castilla and AD Alcorcón, respectively. In the Deportivo – Castilla match, Carlos Marchena scored the goal of the day with a spectacular over-head kick.

Despite losing 2-1 to CE Sabadell FC, Real Murcia CF is still in the playoff zone, while the Catalonian side has escaped the relegation spots after its first victory in the last five matches. Córdoba CF, who saw Real Sporting draw level twice, also stays in the playoff positions.

With 19 points, the same number as Murcia and Córdoba, is Eibar, who defeated Real Zaragoza 3-2. Elsewhere, CD Numancia produced its fifth match in a row without losing as it beat Barcelona FC B 1-0, and CD Mirandés finally escaped its rut after a winless four weeks with a 1-2 victory over Jaén CF, whose five-week run without losing came to an end.

Hércules CF failed to find another win after Girona FC came back twice in their 2-2 draw. Finally, it was the same result in Vitoria, where Deportivo Alavés, who were winning 2-0 at half-time, could only watch as an impressive CD Tenerife managed to level the match and save a point.