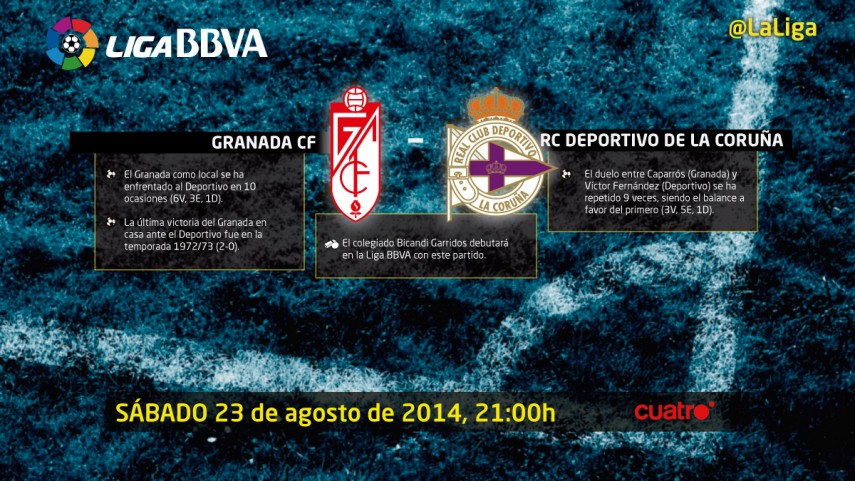 Granada and Deportivo square off in a match that marks Joaquín Caparrós and Víctor Fernández's debuts in the dugouts and the Galician side’s return to the Liga BBVA.

Granada CF and RC Deportivo de La Coruña get underway in the Nuevo Los Cármenes in a season packed with new challenges and promises. The Galician side return to the Liga BBVA after a one-year absence, under the guidance of their new coach, Victor Fernández, confident of establishing themselves in the division. The side from Coruña visit an Andalusian side who have made big changes in the summer transfer window and also have a new coach: Joaquín Caparrós.

The side from Granada will have a full arsenal, with the exception of two suspended players Roberto Fernández and Francisco Medina 'Piti'. However, Jhon Córdoba and Daniel Larsson, two of the team’s new arrivals, were not selected for the squad. As for Deportivo, the injured Manuel Pablo, Lucas Pérez and Diogo Salomão will miss the game.

Joaquín Caparrós was optimistic in his press conference: "We've worked very hard, it has been a very intense preseason. We're looking good and excited to get going. We're going to try and play a good match and get a good result".

His counterpart in the Galician team, Víctor Fernández, was full of praise for his opponents: "We're playing against one of the teams of the summer. Granada have a solid structure from last season and they have added steel to that. They also have a quality and experienced coach".