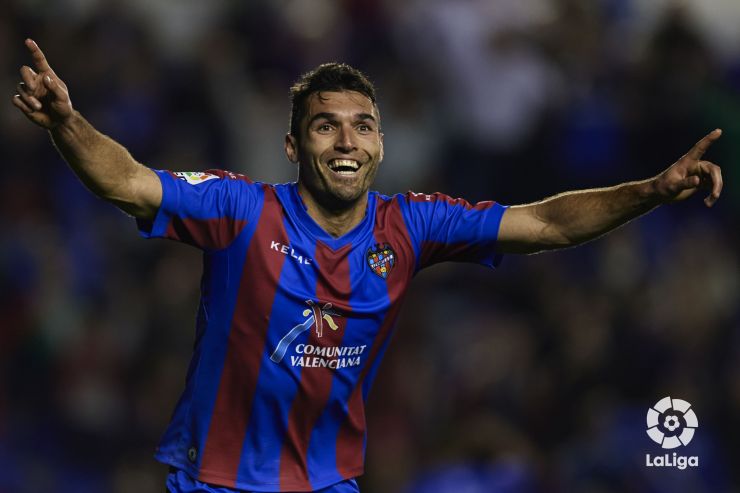 David Barral: "We want to make things difficult for Atlético"

The Levante striker shared his thoughts with LFP.es on this weekend's clash with the Liga BBVA leader and discussed the granotas' season.

A product of Real Madrid CF's youth academy, David Barral (San Fernando, Cadiz, 1983) made a name for himself in Spanish football at Real Sporting de Gijón, a club where he shone and which still has a special place in his heart. On Sunday, the Andalusian striker will be one of the biggest threats to Club Atlético de Madrid, who will visit the Ciutat de València fully intent on taking one step more towards the title. The forward shared his thoughts on the match with LFP.es and discussed the granotas' season.

LFP.es: This Sunday you host Atlético de Madrid, the Liga BBVA leaders. How are you approaching the match?
Barral: As a match against a great team, who always play attractive football. Our motivation is always at a maximum and we want to stand up to Atlético and try and make things difficult for them.

LFP.es: The rojiblancos come into the game after nine consecutive wins, but they have not won in the Ciutat de València since 2007 (0-1). Do you think you have a chance of stopping Diego Simeone's side from extending its run?
Barral: Yes, with our style of football we can stop any team. We have already given FC Barcelona and Real Madrid problems. Why not Atlético? We know they're playing great at the moment, but it is not impossible to get a good result out of it.

LFP.es: Levante are in eleventh place with 42 points and three games left to play. How would you rate the team's season?
Barral: Pretty good. Securing our place in the top flight with games to spare is always good. Levante is a small team that has only been in the Liga BBVA for a few years.

LFP.es: Despite that, you have been in the thick of the fight for the European spots this season. What do you think you lacked to stay there until the end?
Barral: We had to be more consistent throughout the season. We went through a phase with several defeats and we lost our place on the road to Europe, but that was not our goal. Our goal is more than accomplished.

LFP.es: In your first season with the granotas you have become a key player for Joaquín Caparrós. Are you happy with your performances this season?
Barral: Yes, both my and the team’s objective was to stay up. I’m happy with my season and I imagine the gaffer is satisfied too, because things really have gone well.

LFP.es: You returned to the Liga BBVA this season after a spell with Turkish club Orduspor. Did you miss España?
Barral: Of course, I also missed the atmosphere in the stadiums and the teams we have here. I took an important step by returning to Spain and I now enjoy the Liga and its great teams.

LFP.es: You spent some time in the lower ranks of Real Madrid, where you coincided with great players such as Álvaro Arbeloa, Diego López, Borja Valero and Roberto Soldado, among others. What are your memories of that time and what did you learn at the Whites' youth academy?
Barral: I learnt everything at Real Madrid's academy. That was where my journey in football started and I have very good memories of my time there. We won promotion to the Liga Adelante, something that Real Madrid Castilla had not achieved for a while. It was no surprise that we won promotion because we had a great squad.

LFP.es: Your best years so far have been at Real Sporting de Gijón. You won promotion to the Liga BBVA, scored the 1000th goal in El Molinón and you even have a tattoo of their shield. With such affection for the team, how do you feel watching them from a distance?
Barral: Well, I follow all their matches. I have the tattoo and I will always have good memories of Sporting. Above all of Manolo Preciado.

LFP.es: We sadly lost Preciado in 2012. What are your greatest memories of the time you spent with him?
Barral: He was the footballer under whose orders I spent the most time, so I have a lot of memories. He treated players very well, he looked after us and made sure we had everything we needed. He was a coach whose entire squad was happy. I enjoyed some unforgettable years with him.