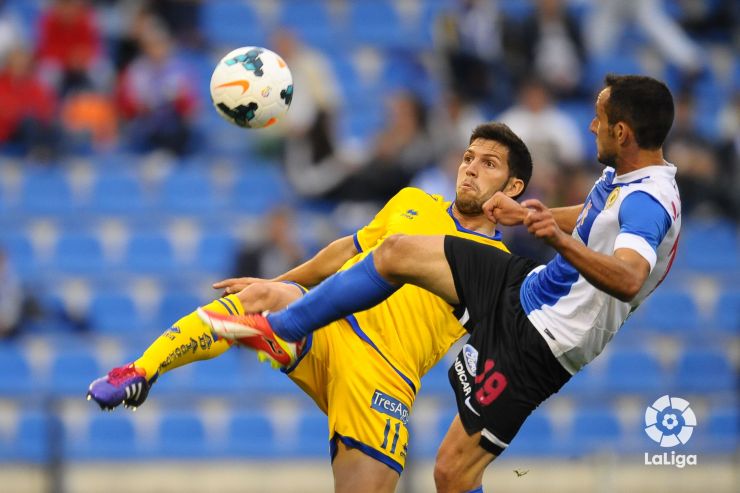 The Alcorcón striker talks to LFP about what has been one of the toughest seasons he remembers with the Madrid side, looking ahead to the future.

A product of the FC Barcelona academy, he matured at Anfield with Liverpool FC and is now enjoying his football at AD Alcorcón, where he strives every day to "make the leap", he admits. Such has been the exciting career of Dani Pacheco (b. Malaga, 1991), one of the bright young hopes of Spanish football and one of the men behind the good run of results that the Madrid team has had in the last few matchdays. The striker talked to LFP.es about the club’s season and looked ahead to the three remaining matches.

LFP.es: Is promotion a realistic target?
Dani Pacheco: More than a target, it's a hope. If we beat Mirandés, Barcelona B and Zaragoza, we'll have a chance, but with the difficulties we've had this season and the competitiveness of the Liga Adelante, it'll be difficult. The main objective was staying up and we've done that. Now our aim is to finish as high up the table as possible.

LFP.es: How would you rate Alcorcón's season?
Dani Pacheco: I'd give it 7 out of 10. I'm positive, but I think we have to demand more of ourselves. We went a long time without winning, but in the end we were able to adapt to a tricky season.

LFP.es: What has been the most difficult moment?
Dani Pacheco: The five months without winning at home seemed like forever. It was difficult going back into the dressing room after the match and seeing that we had let another victory slip through our fingers. Those who have been in the team the longest led the way, and it brought us together.

LFP.es: What has José Bordalás changed since his arrival to bring you five wins in the last seven matches?
Dani Pacheco: With him we have regained our intensity levels and our hunger to compete. He has helped us become more ambitious and has made us a tougher side to play against in Santo Domingo. That has been crucial in getting us to where we are now.

LFP.es: There has been a lot of talk about you being one of brightest prospects in Spanish football, how do you deal with that?
Dani Pacheco: I don't feel any pressure. I am at ease and happy with the decisions I have made during my career so far. I moved to England at a very young age and, although it all went by lightening fast at the beginning, all I want to do now is work hard in order to take the next step and make the most of myself.

LFP.es: Do you see yourself playing in the Liga BBVA next season?
Dani Pacheco: Fingers crossed. That’s my goal. I'm working really hard to make that step up.

"I choose Alcorcón because I knew it was a stable club that had big ambitions, and that it was a side I would feel comfortable with"

LFP.es: What is it that attracted you to the Alcorcón project?
Dani Pacheco: I knew that I was going to have the chance to spend two great years with a stable club that, above all else, had big ambitions. I wanted to develop as a player here, feel at ease and work hard in order to improve. And Alcorcón was the best club for that.

LFP.es: Do you miss the Premier League?
Dani Pacheco: For certain things, yes. I went there when I was 15-years-old and had no choice but to grow up. I like the culture and the manner in which they live football there, but I'm also really happy to be in Spain.

LFP.es: What things did you learn in Anfield that you are applying to your game in Spain now?
Dani Pacheco: They taught me how to compete. I soaked up a lot from what was around me: my teammates, the coaches I had and the footballing concepts they taught me. I went to England after having played with the Cadetes (academy side), where it’s more about having fun than anything else. But once I was there I had to grow up quickly, both in terms of playing football and being a person. I was an incredible experience that has allowed me to get where I am today.