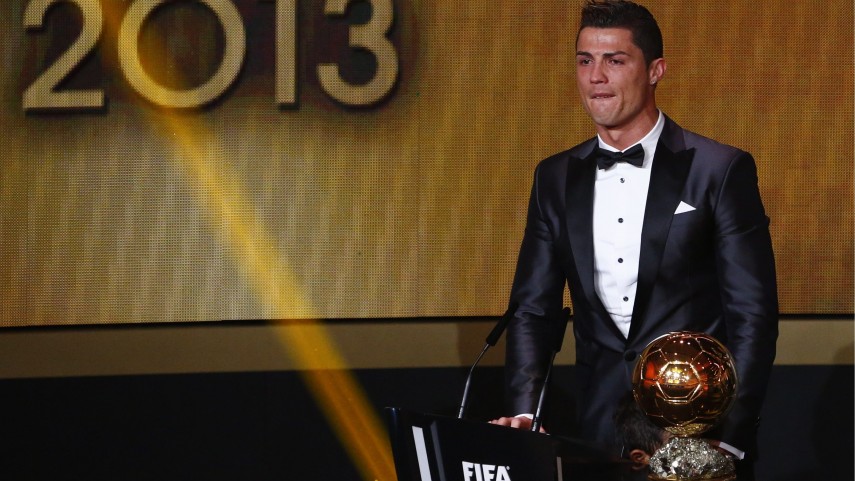 "And the winner is… Cristiano Ronaldo", said Pelé as he announced that the winner of the prestigious accolade was Real Madrid's Portuguese striker, who dazzles fans every week in Liga BBVA.

A legend of world football, Pelé, was responsible for announcing that Cristiano Ronaldo was the winner of the 2013 FIFA Ballon d'Or at the FIFA awards ceremony in Zurich.

The Real Madrid CF striker, who excels in the Liga BBVA every week, beat another of the Liga BBVA's stars, Lionel Messi, of FC Barcelona, and FC Bayern Munich player Franck Ribèry in the final vote.

"I would like to dedicate it to my teammates at Madrid, as it is thanks to them that I am here. It is a huge honour and it was very difficult to win this prize. I would also like to mention Eusébio", said Cristiano Ronaldo, who had tears in his eyes after receiving the award from the hands of FIFA President Joseph Blatter.

The Portuguese is the complete footballer. The eye for goal he demonstrated time and time again last year is just one of his assets on the pitch. Real Madrid and Portugal's leader, the forward has done more than enough to earn one of the most prestigious individual prizes on offer from the Fedération Internationale de Football Association (FIFA) making him the best player in the world.

Speed, power, strength, character… it is a long list of virtues that make Cristiano Ronaldo dos Santos Aveiro (Portugal, 1985) one of the most feared players in world football. 2013 was one of the best years in his professional career. With 69 goals in 59 matches for Real Madrid CF and Portugal, the player averaged more than a goal per game (1.15), surpassing the 63 goals from 71 matches he scored in 2012.

The player from Madeira is already a Real Madrid legend. In 2013 he entered the Whites' all-time top ten scorers list, a group that includes legends of football such as Alfredo Di Stéfano, Ferenc Puskás, Raúl González and Hugo Sánchez, the last footballer he surpassed with 230 goals from 223 matches. In addition, last April, Ronaldo became the club's first player to score 30 or more goals in three consecutive seasons. Also, with his first goals in 2014 (against RC Celta de Vigo on the 6th of January) Cristiano Ronaldo reached 400 goals in his professional career.

The Portuguese superstar has also bagged an incredible six hat-tricks in 2013 in a Real Madrid shirt, giving him a total of 23 since he arrived at the Madrid club. Moreover, Cristiano has scored against all the teams in the Liga BBVA, after finding the net against Elche CF on the 25th of December

CR7 is the driving force behind both Real Madrid and the Portuguese national side. His statistics for his national team are also frighteningly good. He has played 109 matches in which he has scored 47 goals, making him the top goal-scorer in the team's history, together with ex-RC Deportivo de La Coruña player Pedro Pauleta, who has now retired. His importance to the national side was clear in the last playoff game Portugal played against Sweden for a place in the 2014 FIFA World Cup. The forward scored all four goals for his team (the aggregate result was 4-2), including a hat-trick in Stockholm that put the icing on the cake of his superb performance.

The award he picked up today is his second Ballon d’Or de after the one he won in 2008 when he was at Manchester United FC. The accolade will go alongside his FIFA World Player and European Golden Shoe awards from 2011.