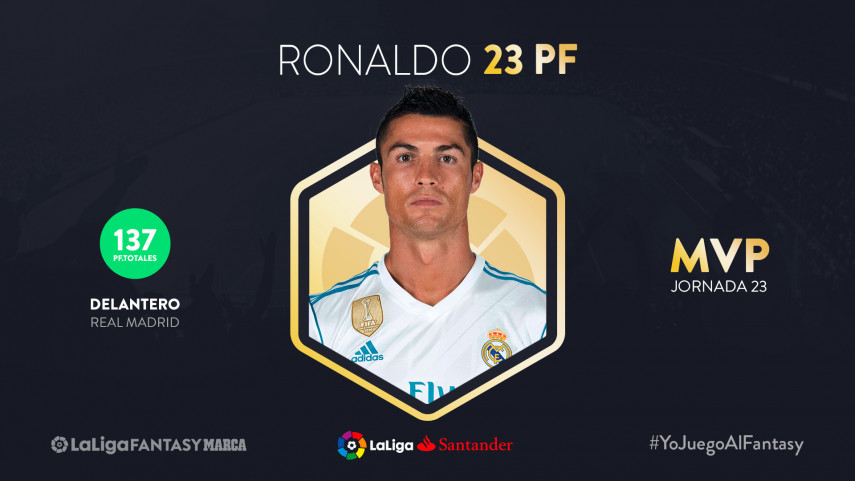 The Portuguese attacker racked up the highest number of points in the latest round of fixtures following his dazzling display in Los Merengues' win over Real Sociedad. With another matchday now done and dusted, it's time to take stock and reveal who made the Best XI on Matchday 23 of the 2017/18 LaLiga campaign.

Fabulous finishes, tasty tricks, endless emotion and superb saves. LaLiga Santander is all about the entertainment and after another matchday of edge-of-your-seat action, we can now take a look at the LaLiga Fantasy MARCA Matchday 23 Best XI.

This star-studded lineup features players from six different clubs, with Real Madrid very much the dominant force. Following their 5-2 drubbing of La Real, the Madridistas contribute no fewer than three of the team's 11 members, including the matchday's standout performer.

The Player of the Matchday honours for Matchday 23 of the LaLiga Santander campaign go to Cristiano Ronaldo. The Portuguese sharpshooter bagged a hat-trick as Real Madrid put the Basques to the sword at the Santiago Bernabeu, with this treble bringing Ronaldo's tally of league goals for the season to 11. 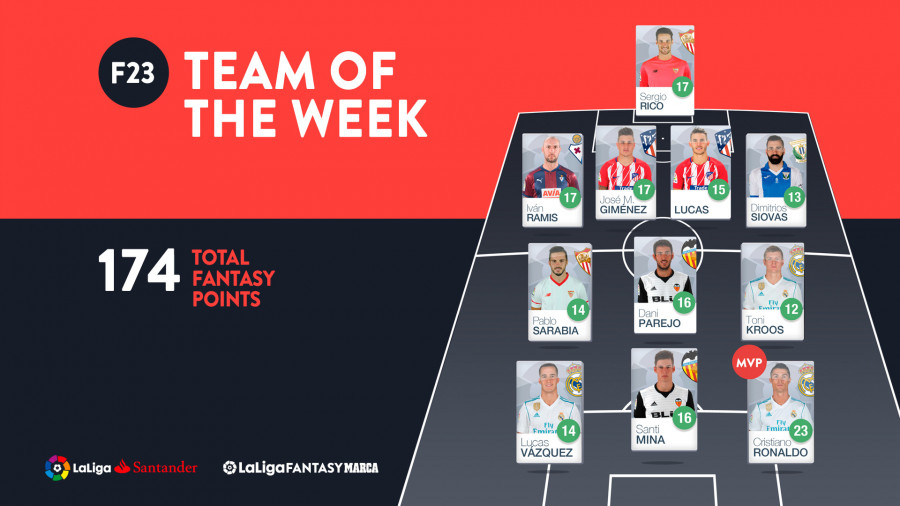 The man occupying the Best XI sticks this time round is Sevilla FC shotstopper Sergio Rico. The Spanish custodian kept a clean sheet, pulling off several stellar stops to help the Andalusians to victory over Girona FC.

The side's defensive unit is dominated by Atletico Madrid players, with two Atleti representatives making the cut following a fine rearguard action from the Madrilenians in their 1-0 away win over Malaga CF. Jose Maria Jimenez and Lucas Hernandez take their places in a backline that is completed by SD Eibar centre-back Ivan Ramis and CD Leganes's Dimitrios Siovas.

The Best XI engine room features a trio of midfield talents who all chipped in with goals in their respective encounters. Dani Parejo got his name on the scoresheet and provided an assist in Valencia CF's derby success over Levante UD. Alongside him are Pablo Sarabia, who struck Sevilla's winner against Girona and Toni Kroos, who was also amongst the goals in Real Madrid's win.

The team's three-man strikeforce notched a total of five goals and three assists in their latest outings. Joining Ronaldo in this potent-looking forward line are his teammate Lucas Vazquez and Valencia's Santi Mina, with the pair earning their places with a goal and an assist apiece in their sides' victories.