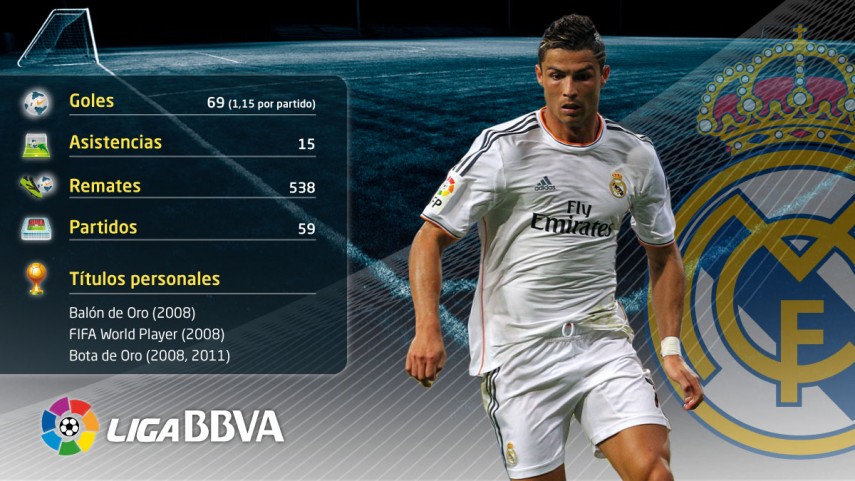 LFP.es takes a look at the Portuguese striker hours before the FIFA presents the accolade in Zurich.

Cristiano Ronaldo is the complete footballer. The eye for goal he demonstrated time and time again last year is just one of his assets on the pitch. Real Madrid and Portugal's leader, CR7 is one of the candidates for the 2013 Ballon d’Or. He has done more than enough to earn one of the most prestigious individual prizes on offer from the Fedération Internationale de Football Association (FIFA) in the ceremony on the 13th of January in Zurich (Switzerland).

Speed, power, strength, character… it is a long list of virtues that make Cristiano Ronaldo dos Santos Aveiro (Portugal, 1985) one of the most feared players in world football. 2013 was one of the best years in his professional career. With 69 goals in 59 matches for Real Madrid CF, the Portuguese averaged more than a goal per game (1.15), a figure that makes him one of the Liga BBVA's most deadly players. CR7 is the man who pulls the strings for both his club and the Portuguese national side.

While he is lethal in front of the goal, he is also a prolific provider to his teammates, last year he was one of the most generous players with 15 assists. Cristiano Ronaldo tops almost every statistic in the Madrid team's attack, a result of the 538 shots he delighted fans with in 2013.

The player from Madeira is already a Real Madrid legend. In 2013 he entered the Whites' all-time top ten scorers list, a group that includes legends of football such as Alfredo Di Stéfano, Ferenc Puskás, Raúl González and Hugo Sánchez, the last footballer he surpassed. Also, with his first goals in 2014 (against RC Celta de Vigo on the 6th of January) Cristiano Ronaldo reached 400 goals in his professional career.

His statistics in a Portugal shirt are also frighteningly good. He has played 109 matches in which he has scored 47 goals, making him the top goal-scorer in the team's history together with ex-RC Deportivo de La Coruña player Pedro Pauleta, who has now retired. His importance to the national side was clear in the last playoff game Portugal played against Sweden for a place in the 2014 FIFA World Cup. The forward scored all four goals for his side (the aggregate result was 4-2), including a hat-trick in Stockholm that put the icing on the cake of his superb performance.

On Monday in Zurich he will have the chance to add another individual trophy to his cabinet. Cristiano won the Ballon d’Or in 2008, the same year in which he took the FIFA World Player award and the European Golden Shoe, a prize he also won in 2011. In 2013, Ronaldo has done more than enough to add to his already-replete list of individual accolades.