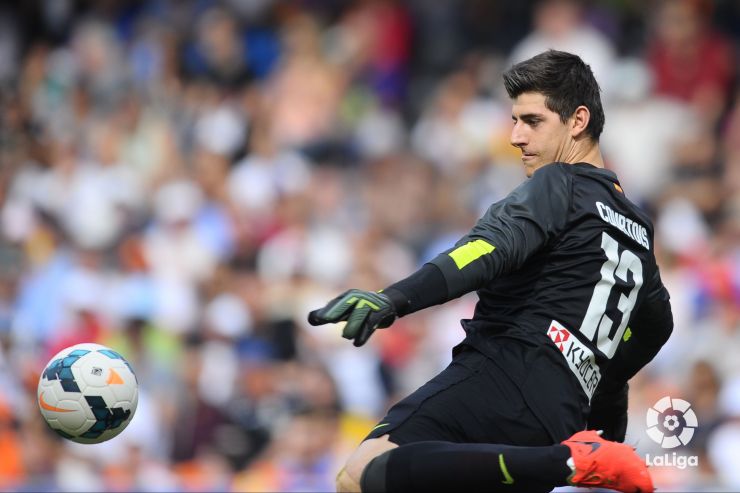 Courtois, the Belgian levee on the Manzanares

The Atlético de Madrid player has been the meanest keeper in the Liga BBVA for two seasons on the trot.

Since the 1995/96 campaign no Club Atlético de Madrid keeper had been the Liga BBVA keeper to concede the fewest goals. Thibaut Courtois has brought José Francisco Molina's trophy back to the Calderón twice in as many seasons.

The young Belgian only let in 24 goals in his 37 matches in the national championship and managed 20 clean sheets, beating his record from the 2012/13 season, making him one of the main architects of the Liga BBVA title for Diego Simeone's team. In all competitions this season, he has conceded 40 goals in 56 matches.

The player, who learned his trade at KRC Genk, is the sixth Atleti player to top the list of meanest keepers, which includes notable names such as Fernando Tabales, Marcel Domingo, Miguel Reina, Abel Resino and Molina.

In the 2012/13 season he was a tough man to beat for Atlético and only 29 goals were put past him in 37 matches. He also surpassed Abel Resino as the Rojiblanco player to have the longest unbeaten spell in the in both the Vicente Calderón and away stadiums.

After winning the UEFA Europa League, the UEFA Supercup, the Copa del Rey and the Liga BBVA in just two seasons, Courtois is tasked with becoming his opponents' worst nightmare for Belgium in the FIFA World Cup. In Courtois, the Red Devils have the best possible stopper to steer them to success in South America and help them in their bid to match their performance in Mexico in 1986, when they reached the semi-finals of the World Cup.

After missing the last two World Cups, Marc Wilmots is at the helm of the best generation of Belgian football. Alongside with Courtois he has the magic of Eden Hazard and the safe feet of another Atlético player, Toby Alderweireld. Belgium are just one point away from topping Group H, although they are already guaranteed to progress to the last sixteen. South Korea will be the final challenge for the Belgians before they take their place among the best 16 teams in the world.

At just 22 years of age, Courtois has already made a place for himself in Liga BBVA history. After a dream season with Atlético de Madrid, the keeper will have a keen desire for more, and to get it he will keep fighting to make things as tough as possible for the strikers in Brazil.