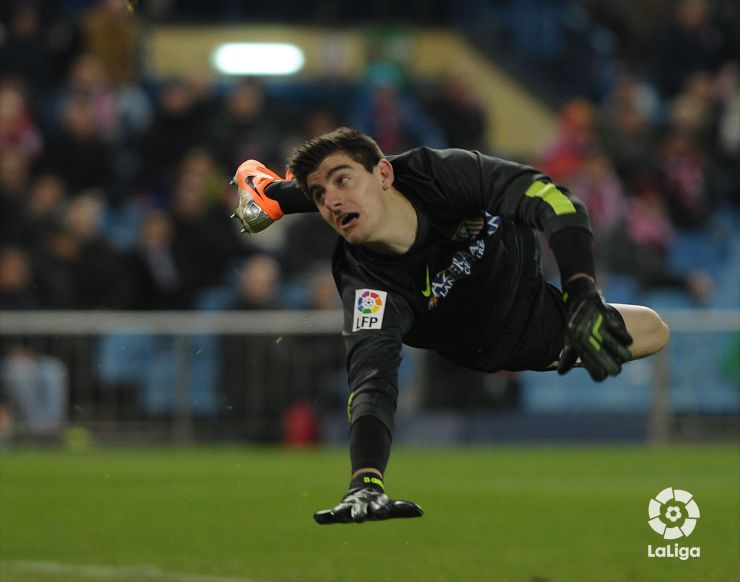 His consistency between the sticks has made him one of the best goalkeepers of the moment, and 20 clean sheets in the Liga BBVA season tend to agree.

A large part of a team’s success lies in strong foundations in goal. And Club Atlético de Madrid has benefitted hugely from the arrival of Diego 'Cholo' Simeone and their stalwart stopper, Thibaut Courtois, a lanky Belgian who arrived in the capital at just 18 years of age with the intention of learning something with the rojiblancos, something he can certainly claim to have achieved.

In his third season as the undisputed no. 1 in the Vicente Calderón stadium, Courtois, as well as surprising opponents with a reliability and consistency that belies his age, is breaking records. With the match in the Mestalla, which his team won 1-0, he kept yet another clean sheet to reach 20 in the Liga BBVA and equal his mark from last season.

Headlines are normally saved for the great goal-scorers, but occasionally there are newsworthy saves that provide a point or even a win. His stops at full-stretch against Real Madrid CF in the 2012 Copa del Rey final, for example, will long be remembered, making him one of the architects of their victory in the tournament.

His save against Esteban Granero on matchday three of the Liga BBVA to stop a txuri-urdin goal will not be easily forgotten either. In fact, the list of great moments from the Belgian shot-stopper goes on and on and, coupled with his team’s brand of football, his ability makes him a very difficult man to beat.

His height gives him a huge advantage in the air. You may think that at 1.99 metres he would lack somewhat in the agility department, but lightning reflexes are another of Thibaut Courtois’ greatest strengths, as are one-on-ones, in fact it is difficult to find something that the young Belgian does badly.

Last season he was voted the Best Goalkeeper in the 2012/13 Liga BBVA. He is a complete keeper who just keeps growing and is destined to be one of the best shot-stoppers on planet football.
Pie de foto: Courtois in action in the Liga BBVA