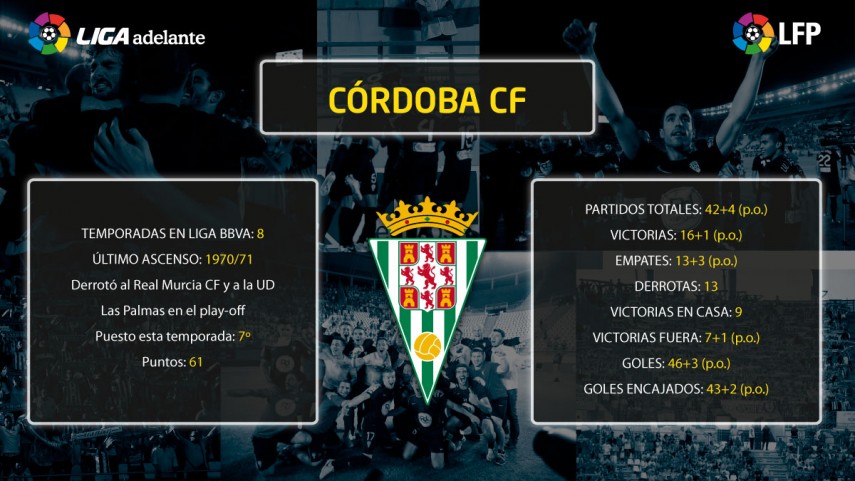 The Andalusian side return to Liga BBVA for the third time in their history after downing Las Palmas in the playoff final.

The Green and Whites are back in the top level of Spanish football. Córdoba CF are back in the big time for the first season since 1971-72, for what will be their third campaign with the top 20 clubs in the country.

It is an achievement that started looking on the cards with the second round of fixtures. Glory doesn’t come without hard work, something 'Chapi' Ferrer lives by. The coach, who played for Johan Cruyff's Dream Team at Barcelona, has allowed Córdoba's fans to dream again.

With very little coaching experience, but a lifetime spent in football, Ferrer took over the club on matchday 27 of Liga Adelante as the club looked to get back on track. He managed to end the second half of the season as the best away side in Liga Adelante and they won the race to finish in the final playoff spot (61pts), finishing just a point behind UD Las Palmas.

As luck would have it, it was the Canarian side that they met in the playoff final for a place in Liga BBVA. Following the 0-0 result in the first leg, and thanks to their solid defence, they went to Las Palmas with the intention of scoring a decisive goal that would see them through. Uli Dávila scored the goal in the final minute to make it 1-1 and put the Califas in the Liga BBVA.

The whole city was dreaming of the side emulating their heroes from 42 years ago. The figure of Miguel Ángel Molina Pons is conjured up in the saves made by Juan Carlos, vital just as Mikel Saizar's were to save Córdoba when they most needed it. Raúl Bravo, Iago Bouzón and Gunino have formed a defence that conjures up memories of that containing López Prieto, Mingorance and Verdugo.

The defence is complimented by quality in the centre of the park. From the partnership struck up between Abel Gómez-López Silva and Rodri-Torres, whilst Luso, Pedro Sánchez and Uli Dávila bring magic to the attack, just as Rojas, Rivera, Cruz Carrascosa and Totó did at the old 'El Arcángel' stadium.

Xisco, an experienced player with a lengthy curriculum, has been the side's goalscorer. He's not been the division's top scorer as Manolín Cuesta was, but he has nevertheless gone down in the club's history, contributing as the side achieved glory.

They are a side that have appeared at the right moment, and in doing so they are now going to fight it out in the top level of Spanish football.