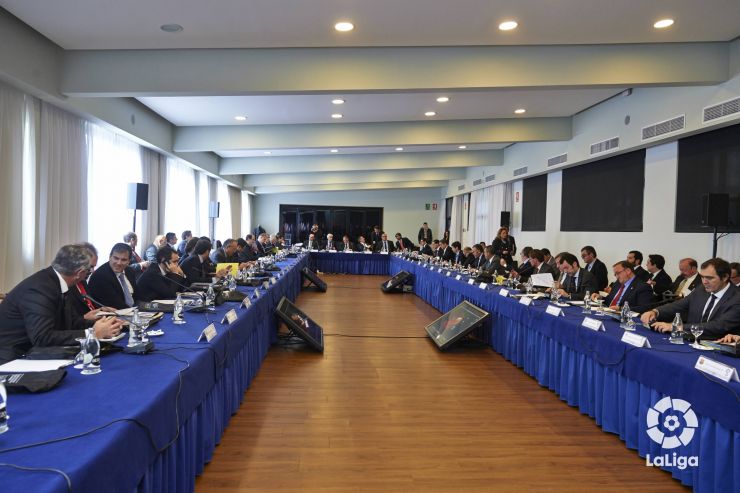 Conclusions from the LFP Extraordinary General Assembly in Valencia

The Assembly was held in Valencia and was attended by most of the Liga BBVA and Liga Adelante clubs.

This morning the LFP Extraordinary General Assembly took place in the Hotel SH Palace de Valencia. Among other things, the following issues were discusse during the meeting, in which the majority of Liga BBVA and Liga Adelante clubs were in attendance:

LFP management report:
1. Integrity management: Manuel Quintanar was presented to the members as the new director of the Integrity Department. He underlined that the priority objectives of the department will be to combat sporting fraud (training clubs) and audio visual fraud, as well as that he proposed a unique European directive in order to set up a Law on Intellectual Property.
2. Strategic projects management: Ignacio Martínez Trujillo was presented as the new director of the department and spoke about various proposed agreements with major technology partners.
3. The Corporate General Management announced a study on the financial impact of the professional football sector on society.
4. Legal Management: The EPFL established a subcommittee to study Match Fixing. The LFP will be represented in this subcommittee by Manuel Quintanar. On top of that, it was also stated that UEFA have requested that all leagues and federations provide reports on the integrity in the various competitions. The LFP has already sent these reports prior to UEFA’s request.

LFP WORLD CHALLENGE.
The basis of the project that unites football and Spanish companies in the ‘Spain Experience’ initiative was presented to the clubs in attendance. The event which has already garnered a lot of public interest will be presented in March 2014.

Statutory changes to the LFP.
- Directors who do not report incidence of match fixing will be severely punished.
- Each club will appoint a person to ensure that integrity is withheld.
- The official auction of LFP statistics has been approved.
- A social discipline judge will be appointed: Manuel Rivero.

The next Extraordinary General Assembly will take place in Bilbao with the date still to be determined.