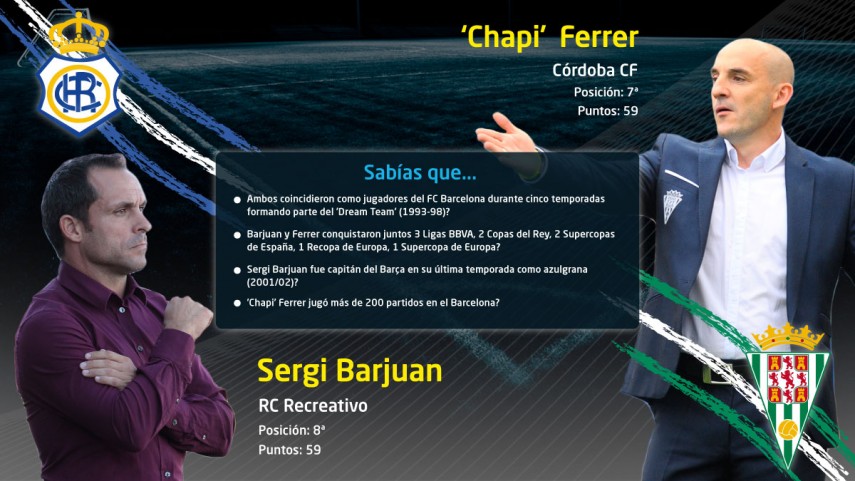 Clash of class in the dugouts

Sergi Barjuan and 'Chapi' Ferrer, ex-members of the famous 'Dream Team', will meet on Saturday in a passionate encounter between the managers of Recreativo and Córdoba, respectively.

RC Recreativo de Huelva meet Córdoba CF in what is practically a final and a taster of what is to come in the playoff. However, this match has an added ingredient that will make it even more special. Two old friends will square off in a game in which fans in the Nuevo Colombino will not only be watching the pitch, they will also divert their gaze to the benches in search of the two managers. They are: Sergi Barjuan (Recreativo) and Albert 'Chapi' Ferrer (Córdoba).

They were teammates at FC Barcelona and are now top-class rivals in the dugout. Having shared five incredible seasons with the 'Dream Team', forming part of the best side of its time, their own brands of football now clash. It is time for them to demonstrate what they learnt with Johan Cruyff's Barça.

Their presence on the flanks, the left for Barjuan and right for Chapi, built the essential foundations for what was a very attacking team. In addition, the former was captain of the Azulgranas during his last season there, while the latter played 200 games in his time at Barça.

We will see what the two coaches have learned at the helm of their respective teams. Level in the table with 59 points, Barjuan's team are in eighth position, while his counterpart Ferrer has Córdoba one place above them. This weekend will be the first time they have met, as in the first half of the season, when the Blanquiverdes won 2-0, Chapi was not yet in the dugout.

It is a critical match that will start to paint a clearer picture of which teams will occupy the spots that offer promotion to the Liga BBVA. Córdoba start out with an advantage over Recreativo, because despite being level in the Liga Adelante table, the Andalusian outfit already occupy the promotion zone, as FC Barcelona B (4th place), are a reserve team and therefore cannot be promoted.

Everything is lining up for Recreativo and Córdoba to put on a spectacular show. Even more so given both teams' excellent form at the business end of the season. Both of them have won the last two matches they have played. Barjuan's men beat Girona FC (1-0) and UD Las Palmas, with a spectacular second-half comeback, having been 2-0 down. The side managed by Ferrer, for their part, beat CD Tenerife on the road (0-1), and saw off Real Madrid Castilla (2-0) in their last match.

All in all, this promises to be one of the most attractive games on matchday 41 of the Liga Adelante. Sergi Barjuan and Chapi Ferrer, Ferrer and Barjuan. It is a clash that promises to be first-class on the pitch, as well as highly intriguing in the dugouts.