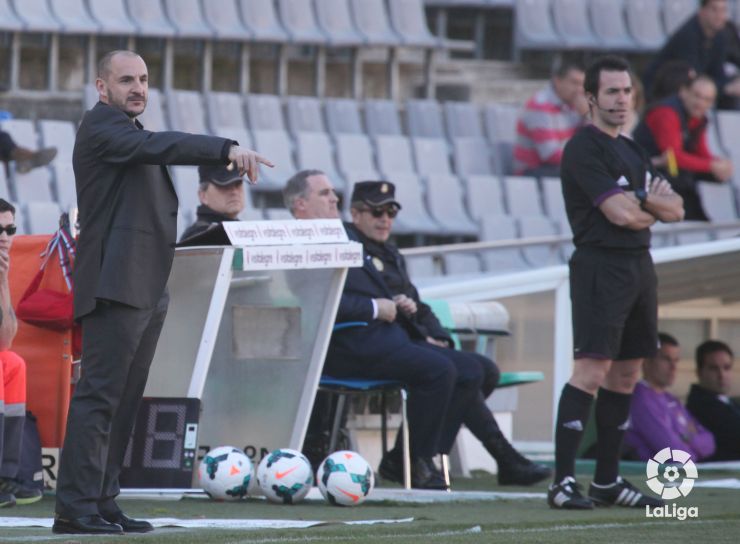 'Chapi' provides a boost for Córdoba

Since the man from Barcelona was assigned coach of the blanquiverdes they have had a rebirth in the Liga Adelante.

There is a new man in charge in the dugout at the Municipal Nuevo Arcángel stadium: Albert 'Chapi' Ferrer. The manager from Barcelona arrived at Córdoba CF as a replacement for Pablo Villa on matchday 26 of the competition after the team suffered three defeats in four matches.

With barely any experience as a manager but practically a lifetime in the game, Ferrer got to work with the Andalusian outfit to get them back on track in the competition and search for the results they need to stay in touch with the fight for the playoff zone, which is currently propped up by UD Las Palmas, who are just a point away (39).

Ferrer's first challenge came against Real Jaén CF, a team that, despite having recently come up, has managed to adapt to the competition and find a place in the middle of the table. His first outing ended in a goalless draw between the two Andalusian teams in a match that had some promising signs for the side from the Nuevo Arcángel.

A week later, against Girona CF, Córdoba rewarded his efforts with their first victory (0-1) in six games and Chapi Ferrer's first at the helm of the side from Cordoba. The result keeps the team's objectives alive and lets them dream of new challenges in the coming weeks.

Solidity in defence has been one of the driving forces behind the Andalusians' return to form in the competition. In the final four matches before Ferrer's arrival, Córdoba conceded seven goals and scored just one. Now, after two games in charge, the blanquiverdes have not conceding any, while also scoring one, the one that gave them victory over Girona.

The califas' next two ties represent a golden opportunity to continue to display their worth in the Liga Adelante. Las Palmas, a rival in the fight for the playoffs, will be the first obstacle in their way as they visit the Cordoban fortress, a ground that has only witnessed three home losses so far this campaign. A week later it will be time to square off against CD Lugo, who are currently on the same number of points (38) as Córdoba.

In total, the four points from the six on offer in these two matches could mark the start of a resurgence in the competition from Córdoba, a team that is hoping to reach the Liga BBVA for the ninth time in its history.