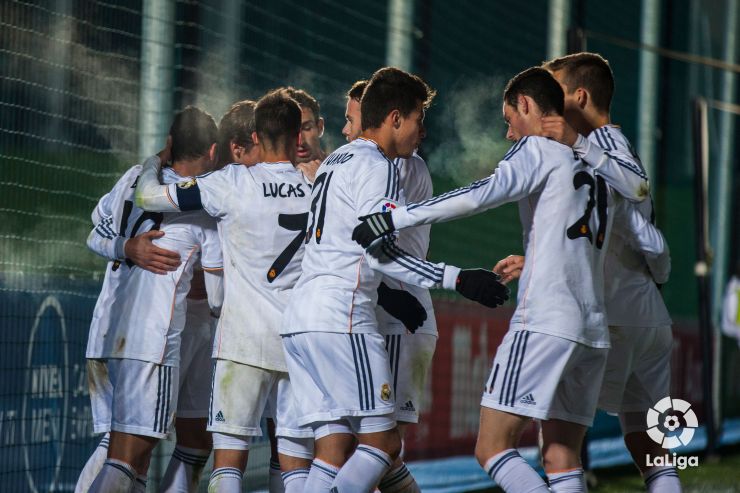 The Whites' reserve team are on a hot streak and have finally managed to escape the relegation zone after their victory over Zaragoza (0-2) on Sunday.

The Alfredo di Stéfano Stadium finally has something to celebrate thanks to some promising performances from Real Madrid Castilla in recent months. After the side's victory over Zaragoza (0-2) last weekend, Real Madrid's reserve team has escaped the relegation zone, something that was looking unlikely earlier in the season.

Castilla has been in the danger zone since the second day of the championship, and it was even as many as nine points away from safety at one point. But the arrival of Manolo Díaz in the dugout has brought a breath of fresh air to the team.

Since his debut, on matchday 15 of the Liga Adelante, when the Madrid side took on CD Numancia (0-0), the reserves have collected 23 points from a possible 36, winning four of their last five matches. If the league had started on his first day at the helm, Castilla would now be the Liga Adelante leader.

The coach from the capital has brought profound changes to the team. Manolo Díaz started out with the advantage of knowing some of the players, who were under his charge at Real Madrid C between 2010 and 2013. Such is the case with Sergio Aguza, Lucas Vázquez and José Rodríguez who are having great seasons.

In addition, Omar Mascarell, who has proved his eye for goal by finding the net six times, and Raúl de Tomás, Lucas Vázquez and Burgui, with five each, have led the team to a great second half of the Liga Adelante season.

Having managed to leave the relegation zone, Castilla's new challenge is to keep up the good results and concentrate on staying in the Liga Adelante. To do so, they will face CD Lugo, RC Recreativo de Huelva and RCD Mallorca in the coming weeks, matches for which Whites' confidence will be sky-high.