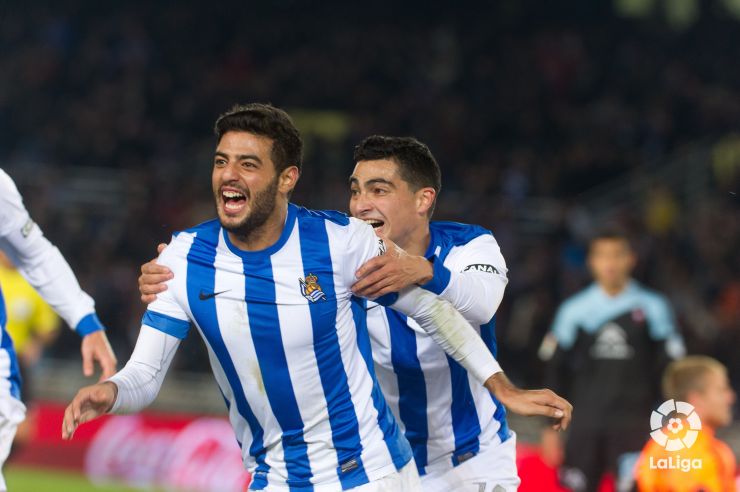 Carlos Vela brings the Anoeta to its feet

Real's striker put four goals past Celta, making him the first txuri-urdin player to bag a double hat-trick since 1995.

The Liga BBVA is back with a vengeance, delivering excitement, thrilling moves, extraordinary saves and, above all, plenty of goals. Four of the 39 goals scored this weekend were the work of one player, the Mexican Carlos Vela, whose goal-scoring exhibition made him the clear man of the match in Real Sociedad de Fútbol's 4-3 win over Celta de Vigo.

Real's manager, Jagoba Arrasate, opted for Vela as his centre forward, despite the fact that the Cancun-born player normally starts on the left-wing. The striker did not disappoint and showed that his coach had struck gold when, after just six minutes of play, he put the finishing touches on a pass from Alberto de la Bella to make it 1-0.

The Mexican popped up again when he team needed him the most. Real Sociedad were 1-3 down when the clock read 60 minutes after a brace from Rafinha and Celta's goal from Álex López, but Vela came to the rescue. In the space of 20 minutes the striker would score three more goals, the first coming in the 61st, to produce a miracle comeback and bring the Anoeta to its feet.
"It would be tough to repeat a match like that. You work hard in every match to help as much as possible. Today was a great day for me. The best of all is that we were able to win, otherwise it would have been bittersweet", said the striker after scoring four goals for the first time in his career.

The last player to find the net four times in a Real Sociedad shirt was the Bosnian Meho Kodro in 1995 in a match against CD Tenerife that ended 5-2. Carlos Vela also becomes the sixth txuri-urdin player to achieve the feat after Santiago Urtizberea, José Miguel Arregui, Jesús María Satrústegui, José Mari Bakero and Kodro. As if that was not enough, Real's number '11' is now the only Mexican to have netted four times in a game in the history of the Liga BBVA.