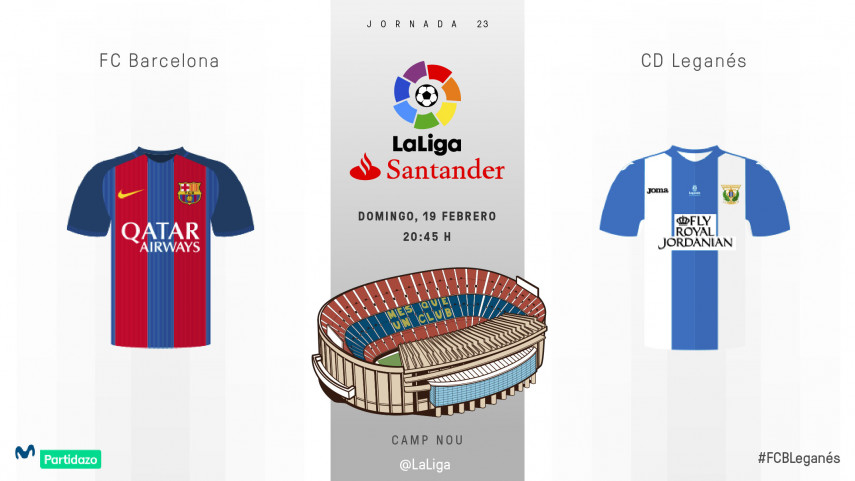 The Catalan giants will be going all out to extend their 15-game unbeaten run against the Madrilenians, who go in search of three precious points to ease their relegation fears in this, their first-ever visit to the Camp Nou.

- The Azulgranas are riding a 15-game undefeated streak in LaLiga Santander (W10 D5), which is currently the division's longest unbeaten run.

- Neymar is very much the leading light in Barcelona's attacking ranks right now. The Brazilian tops this term's LaLiga Santander standings in terms of chances created (3.06 per game), successful dribbles (5 per game) and touches in the opposition's box (8.33 per game).

- This fixture sees Los Pepineros visit the Camp Nou for the first time in the club's history. The fact that only two sides have emerged victorious in their maiden league clashes on Barça's patch (Malaga CF claimed a 2-1 win in the 1999/2000 season and Villarreal CF ran out 3-1 winners in the 1997/98 campaign) doesn't bode too well for Asier Garitano's troops.

- Gabriel Pires is a key figure within this Leganes side and the midfield man can lay claim to being the only LaLiga Santander player to have got the better of Marc-Andre ter Stegen from a direct free-kick.

Getting to the Camp Nou
Address: C/ Aristides Maillol (Main entrance at No. 15) or Av. de Joan XVIII (Access from Boulevard: No. 9), 08028 Barcelona