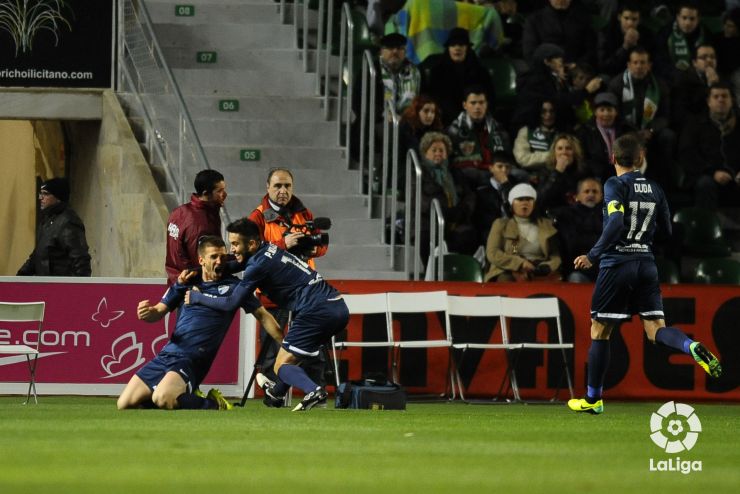 The Málaga player's five goals mean he is in the midst of his best season, during which he has become a genuine threat in set-pieces, having scored four with his head.

The Zaragoza-born midfielder is a goal-scorer in disguise. His 1.83 metres have given the young Ignacio Camacho the confidence in the air to make him a regular in Bernd Schuster’s plans.

From young hopeful to reality, Camacho has found the net five times so far this season, helping Málaga take a big step towards salvation. It is a mark he has never reached before in one season, and he still has six matches left to add to his haul.

Moreover, Camacho is a defensive midfielder, making his achievement all the more impressive. His first goal came in the Estadio Martínez Valero, where he gave his team a 1-0 victory over Elche CF. It was no coincidence that he scored a brace against RC Celta de Vigo on the 21st of March: one of the goals was a header and both were from set-pieces. It was a morale-boosting assault on a direct rival in the fight for Liga BBVA survival.

It is no longer a surprise that he is one of the most difficult players to deal with in the air, as he ably demonstrated in his last match, against Granada CF. Another two headed goals gave Málaga the lead. Such is the fear he strikes into the hearts of his opposing defenders that the midfielder had to be brought down during a corner to prevent him from completing his hat-trick, resulting in a penalty his team were able to convert.

Having changed from red and white to blue and white stripes, Camacho looks to have made the centre of Málaga's pitch his own. Since the young player made the move from Club Atlético de Madrid to the Costa del Sol, he has more than delivered on the potential he promised. He is the personification of security and strength, characteristics to which he can add another ability that few expected: goal-scoring.

The player himself is in no doubt, despite his good performances, as to what is the most necessary thing for his club at this time: "Victories continue to be the most important thing, no matter who scores the goals. It is true that I am enjoying a sharp spell in front of goal, I have always said that it is not my role, although evidently, as footballers we really like to score goals, above all if it leads to a victory", he revealed after the match against Granada.

This new maturity has come at the age of 23. Not because of his goals, but because of his progress as a player. Camacho's success is only just starting and his head will surely help him along the way.