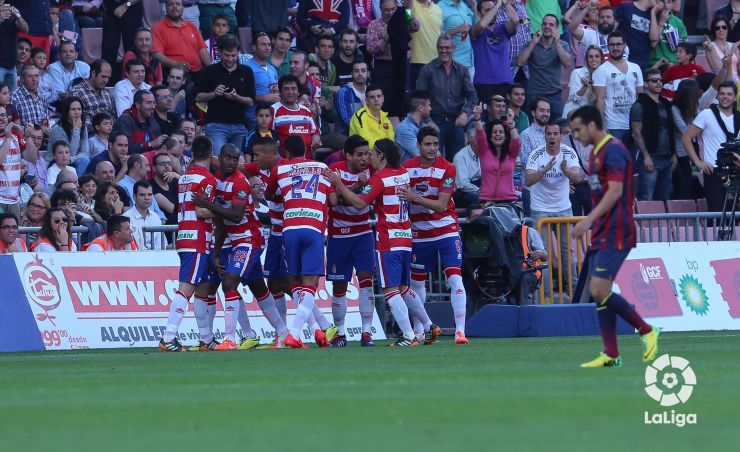 The azulgranas lost to a Granada who took the lead through a counter-attack after 16 minutes and managed to hold on to it until the end of the match.

A goal from Yacine Brahimi was enough for Granada CF to beat FC Barcelona 1-0 on matchday 33 of the Liga BBVA. The victory leaves the Andalusians mid-table and the azulgranas cannot afford to lose again if they are to stay in the fight for the title.

It took sixteen minutes for the Andalusians to open the scoring and take the lead against a Barcelona who showed signs of fatigue throughout. Lucas Alcaraz’s understudies, aware of what was at stake, were cannier than the azulgranas and made the most of a counter-attack with a goal from Yacine Brahimi to make it 1-0.

With absentees in defence and midfield, Barça tried to cut the deficit with several moves created by Cesc Fábregas, but Granada who came closer to getting a second than Barça were to drawing level.

The Catalan outfit came out in the second half with a new mind-set. Messi, Neymar and company were determined not to lose on the road again, as they did to Real Valladolid CF and they started to ask questions of Orestis Karnezis, who was a vital factor in obtaining his team’s three points. First he stopped Leo Messi’s free-kick and later saved shots from Andrés Iniesta and Pedro. Granada held on to take three points.