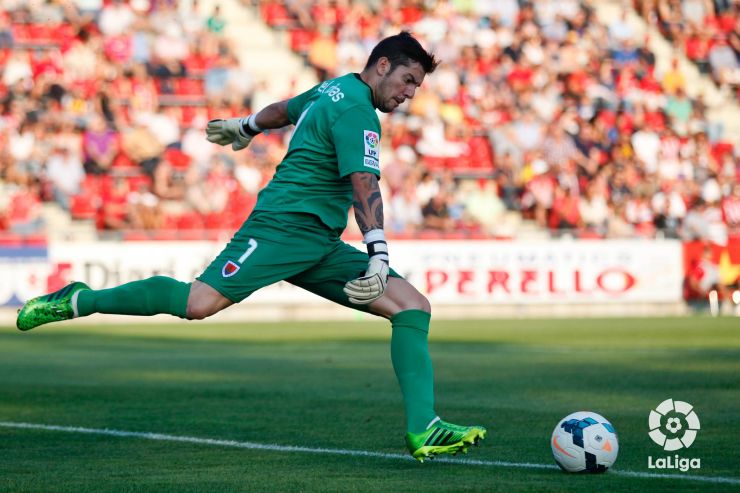 Numancia's keeper has set a new record for the season of 540 Liga Adelante minutes without conceding after accumulating six straight clean-sheets.

CD Numancia and Biel Ribas form a formidable twosome in Soria. The side managed by Juan Antonio Anquela can count among his men a player who has been phenomenal in recent weeks.

It is his goalkeeper, Biel Ribas, who has played 540 minutes without letting a single goal in, who has taken Numancia to fifth place, Liga Adelante promotion playoff spot, with 41 points.

Since Vicenzo Rennella put the last goal past him in the 90th minute against CD Lugo on the 19th of January, Ribas has played six matches on the trot without conceding. Great performances such as Sunday's against Real Murcia CF, have allowed the side from Soria to dream of Liga BBVA football. Apart from coming out on top of several crucial one-on-ones, the shot-stopper from Mallorca saved Kike García's penalty in the final stages of the match, rescuing a vital win for his team.

In the eleventh minute of the match against Murcia, Biel Ribas surpassed his counterpart at Deportivo de La Coruña, German Lux. The Argentinian keeper had set a record for the season of 461 minutes after four clean-sheets until Víctor Rodríguez, Real Zaragoza's midfielder, finally managed to beat him. Now Ribas has taken the baton and he will be sure to give it his all to raise the bar as high as possible.

So far, Real Jaén, Girona FC, UD Las Palmas, Córdoba CF, CE Sabadell FC and the above-mentioned Murcia have all failed to find a way past Numancia's keeper. In addition, the consistent results and defensive capacity of Anquela's team have led Numancia to third place in the Liga Adelante's fewest goals conceded ranking, only behind SD Eibar and RC Deportivo de La Coruña.

In his second campaign with the team from Soria, Ribas is putting together his best season in the Liga Adelante and one of the best of his career. The next challenge for the keeper from Mallorca will be stopping the Liga Adelante's most prolific scorers together with RC Recreativo de Huelva, Real Sporting de Gijón, who have found the net 44 times. A look at his stats is enough to see that Ribas has never been more ready for the task.