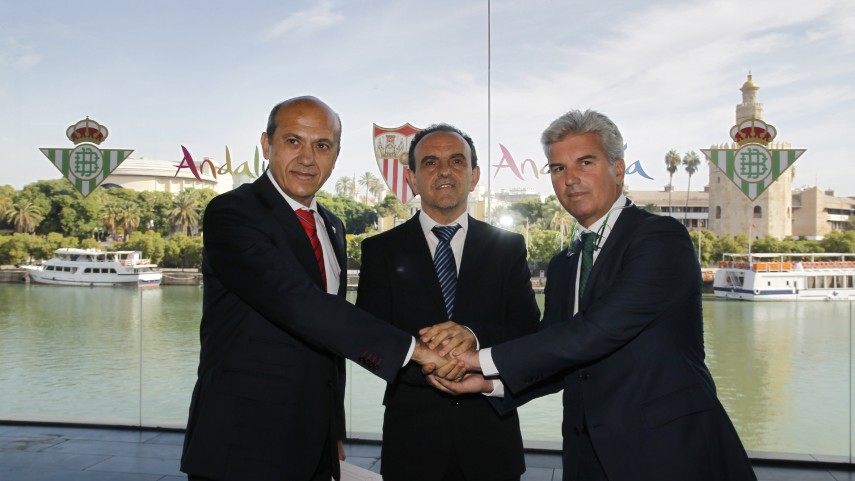 Betis and Sevilla, at one for their city

Both sides have signed an agreement in order to promote the image of Andalusia around the world.

With the objective of promoting the image of Andalusia across the globe, and taking advantage of the close proximity if the forthcoming UEFA Europa League fixtures, Real Betis Balompié and Sevilla FC have signed an agreement to collaborate with the Andalusia Tourism Board.

Present at the act was the councillor for Tourism and Commerce, Rafael Rodríguez Bermúdez, accompanied by the hierarchy of both Seville-based clubs, Miguel Guillén, president of Betis, along with José María del Nido, his counterpart at Sevilla.

With the signing of this agreement, the Andalusia Council have shown their faith in the sides who represent the region on an international level. Rafael Rodríguez explained that "it's important to link elite sport and tourism in Andalusia, and to do this with two clubs of the importance that Betis and Seville have for the projection of Andalusia as a place, tourism destination and international reference".

For his part, Miguel Guillén affirmed that Betis were on board, adding: "Andalusia will travel with Betis. We're proud to be from Andalusia. Many Andalusians feel that Betis are the best thing about their region".

José María del Nido said: "we're a loyal club and it was never in doubt that we would carry, as we have done in our 17 European seasons and 114 matches to date, the name of Andalusia and the city of Seville".