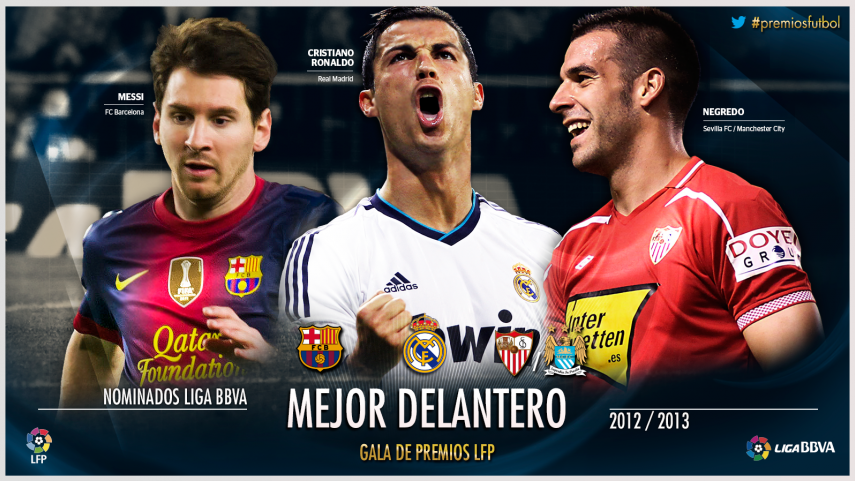 Cristiano Ronaldo, Messi and Negredo will fight it out for the prize during the LFP Gala on the 2nd of December.

Three men will fight it out to be the last season’s best Liga BBVA forward. 105 goals were scored between them during the 2012/13 campaign, underlining how lethal all three are in front of goal. Now they will battle it out for the Best Striker accolade at the LFP Awards Gala on the 2nd of December.

Lionel Messi finished last season with a spectacular average of 1.4 goals per game. The Argentine forward scored 46 of Barcelona’s 115 goals, making him the Liga BBVA top goal scorer as well as earning him the Golden Boot, an award given to the most prolific goal scorer in all the European leagues.

Cristiano Ronaldo was the second highest goal scorer in the Liga BBVA with a record of 34 from 34. The Portuguese was the main line of attack for Real Madrid, and a hugely important asset for the Whites. His average of a goal per game made him one of the most consistent players during the 2012/13 season.

Álvaro Negredo was the top Spanish goal scorer last season. The former Sevilla FC player scored nearly half the goals for his team (25), which led the Andalusian side to a ninth place finish. His magnificent performances didn’t go unnoticed, as Manchester City decided to opt for his services over the summer.