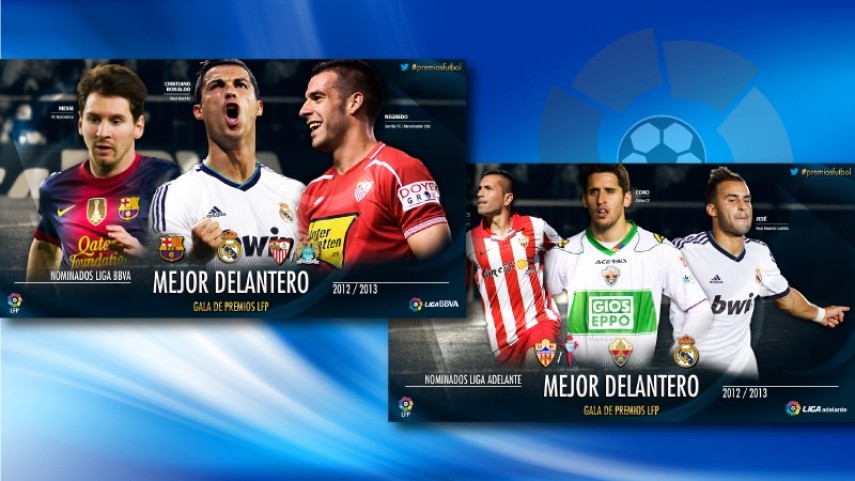 Cristiano Ronaldo, Messi and Negredo in the Liga BBVA, and Charles, Coro and Jesé in the Liga Adelante will fight it out for the accolade.

The Fifth Liga de Fútbol Profesional Awards Ceremony will award the best strikers from the Liga BBVA and the Liga Adelante during the 2012/13 season. The nominees, all of whom led the line for their respective teams during the last campaign, will have to wait until Monday the 2nd of December to find out who the winners are.

Cristiano Ronaldo, Lionel Messi and Álvaro Negredo are the three nominees from the Liga BBVA, who between them scored over 100 goals last season and are continuing to shine in front of goal during this campaign. The Spanish man, who notched up 25 goals for Sevilla last season, deserves special mention for being the top Spanish goal scorer in the Liga BBVA.

Meanwhile, three players stood out in attack in the Liga Adelante last season. Charles, who is now with Celta Vigo, was a fundamental piece in UD Almería’s return to the Liga BBVA, scoring 27 times during the club’s promotional campaign. Ferrán Corominas was one of the heroes responsible for putting an end to Elche’s 24 year absence from the Spanish topflight, while Jesé Rodríguez broke the record for most goals scored by a Real Madrid Castilla player in one Liga Adelante season with 22 goals.