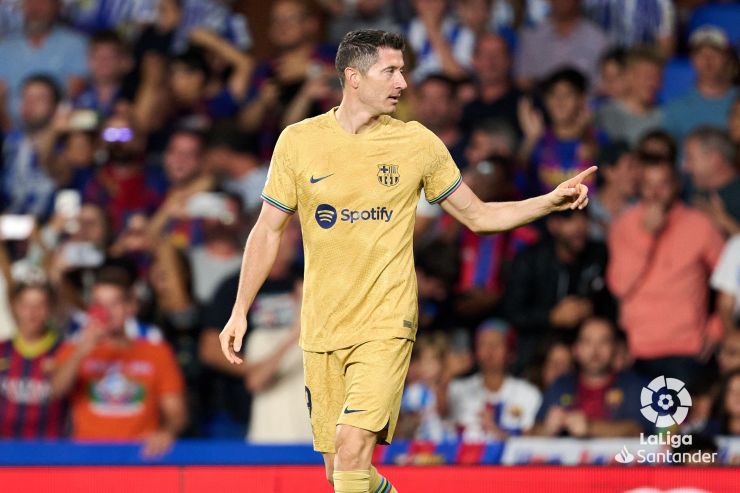 Followers of the Spanish top flight will be treated to a fierce bout between two of the leading number 9s in world football.

Despite having been made to wait until Matchday 2, the mouthwatering contest between Karim Benzema and Robert Lewandowski to reign supreme in the LaLiga Santander goal charts is well and truly up and running. The Real Madrid sharpshooter and his FC Barcelona counterpart opened their accounts for the season in the second round of games to help their teams to victory: the Frenchman set Los Blancos on their way in their trip to RC Celta, whilst the Pole bagged a brace in Barça’s triumph over Real Sociedad.

The pair are amongst the most prolific forwards on the planet and after waging a battle at a distance for many years, this season will see them pit their goalscoring wits against each other every weekend in LaLiga Santander as they strut their stuff across Spain’s top-flight stadiums, adding even more international gloss to the competition in what promises to be a hard-fought battle.

However, there is far more to the duo’s game than goals, with both players making major contributions with their all-round play. Indeed, Lewandowski teed up Ansu Fati to round off a 4-1 rout for the visitors in San Sebastian, while Benzema earned a penalty and was heavily involved in much of the Merengues’ attacking endeavours in Vigo.

However, if the Matchday 2 games taught us anything it’s that neither Barcelona nor Real Madrid are overdependent on their two hotshots. Ousmane Dembele and the aforementioned Fati both got their names on the scoresheet against the Txuri-urdin, while Luka Modric, Vinicius and Fede Valverde were all amongst the goals for the Madrilenians. That said, both Lewandowski and Benzema are in the privileged position of having a host of teammates with the ability to provide the ammunition for them to fire.

The battle to finish the season as the league’s leading marksman is, however, far more than a
two-man race. Indeed, there are a number of other lethal forwards who fully intend on giving the two leading contenders a run for their money throughout the 2022/23 campaign. One such hopeful is Real Betis hitman Borja Iglesias, who has come flying out of the blocks and sits top of the pile with three strikes to his name, while five players join Lewandowski on two goals: Chimy Avila, Alvaro Morata, Alex Baena, Iago Aspas and Juanmi.

The battle to be crowned the division’s top goal-getter looks certain to be fiercely contested, with the main pretenders to the crown already up and running. Although nobody will be making life easy for them, our two sharpshooters, Benzema and Lewandowski, continue to stand out from the crowd on account of their goalscoring records in recent seasons.

The French forward begins the defence of the trophy he clinched last season courtesy of an impressive 27-goal haul, which helped Real Madrid to claim the 2021/22 LaLiga Santander honours. The Pole, meanwhile, enjoyed an equally successful campaign, finishing top of the goal charts in the Bundesliga with 35 strikes to bring the curtain down on his time in Germany by claiming the award for a seventh time and for the fifth season in as many years.

Lewandowski has landed the last two editions of The Best FIFA Men’s Player (2020 and 2021) and collected the European Golden Shoe in each of the last two campaigns. While the Poland international boasts a mightily impressive haul of awards, Benzema is also a force to be reckoned with in the individual stakes. Indeed, the Lyon-born attacker finished top of the goal standings in last season’s Champions League, playing a key role as Real Madrid captured the continental crown.

Recent arrival Lewandowski has checked into LaLiga Santander and brought his considerable goalscoring talents with him as he prepares to go head-to-head with Benzema and the rest of the attacking aces tasked with propelling their teams to glory. This particular contest promises plenty of goals and no shortage of drama right the way through until June 2023, so we’d recommend that you just sit back and enjoy the ride!