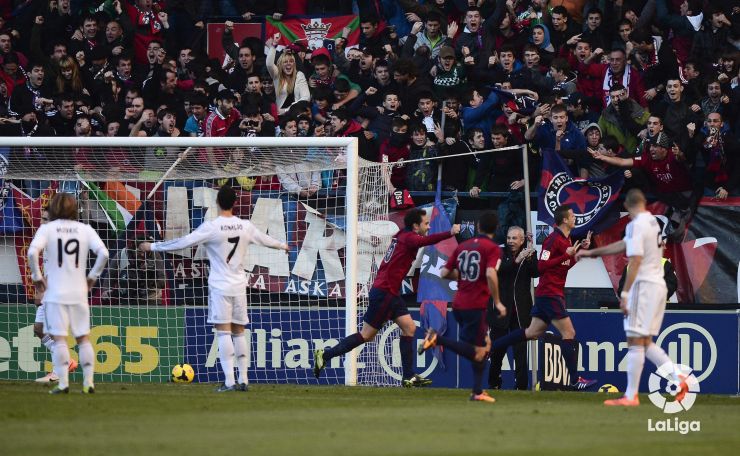 Saturday in the Liga BBVA saw victory for FC Barcelona and Málaga CF, while Real Madrid CF stumbled to a point in El Sadar.

One of Saturday's upsets on matchday 16 of the Liga BBVA came at the hands of CA Osasuna who had Real Madrid against the ropes. Oriol Riera's two goals gave his team a cushion, but the side from the capital did not want to leave Navarre empty handed, and first Isco, then Pepe, rewarded their endeavours. The result is another example of Real Madrid's dislike of El Sadar, where they have only won once in their last six visits.

In the Estadio de Vallecas, Granada CF demonstrated why it is one of the best Liga BBVA teams away from home. Lucas Alcaraz's men defeated Rayo Vallecano in a match that the Andalusians controlled from start to finish. The defeat leaves Rayo's fate in the hands of Sunday's matches, while Granada now sit comfortably in the middle of the table.

FC Barcelona were true to their word and despite being faced with Villarreal CF, one of the Liga BBVA's toughest sides, they were victorious. Neymar gave another masterclass and he was clearly one of the best players on the pitch. The Yellows equalised with a goal from Mateo Musacchio, but Neymar gave the blaugrana three points with his second goal of the match.

In Saturday's final game, Málaga CF defeated Getafe CF thanks to a goal from Roque Santa Cruz with 15 minutes left to play. These results mean that Barcelona have the lead on their own, at least until tomorrow, while Málaga have escaped the relegation zone.