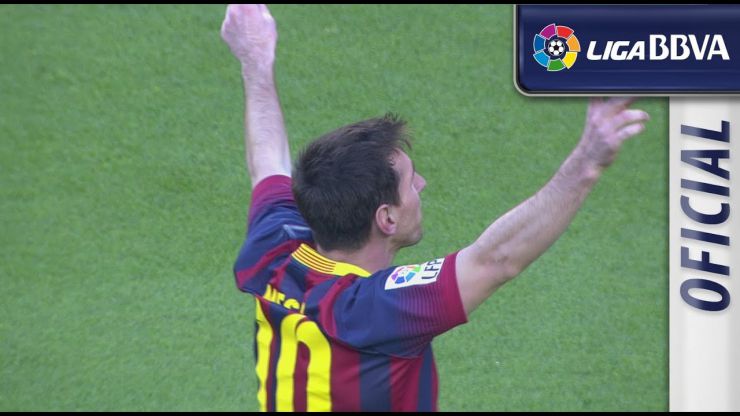 Barça get even against Osasuna

After their defeat to Valladolid, the team stamped their authority in front of their home support and overcame the rojillos with a hat-trick from Leo Messi.

There was a party atmosphere at the Camp Nou with FC Barcelona’s crushing 7-0 defeat of Osasuna on the 28th matchday of the Liga BBVA.

By the end of the first half the Catalan side had already shown that their defeat last week against Valladolid was nothing more than a slip-up. Although Osasuna started strongly and made a statement of intent at the Camp Nou, Leo Messi opened the scoring in the 18th minute and silenced the rojillos. Next came goals from Alexis Sánchez and Andrés Iniesta, who scored his second of the season in the Liga BBVA with his left foot.

After the break, with 3-0 showing on the scoreboard, Oriol Riera had several chances to close the gap, but good fortune and, above all, faith, prevented Osasuna from penetrating Víctor Valdés’ goal. Leo Messi had time to score two more goals and go down in history as Barcelona's all-time top goal-scorer with 371. Pedro Rodríguez and Christian Tello, the latter as soon as he took to the field, also contributed to the victory with two great goals.

With this result, the Catalans keep the pressure on Real Madrid CF and will go into the Clásico four points behind the leaders, while Osasuna will have to make their home ground a fortress to avoid leaving more points out on the field and making their lives difficult in the final weeks of the season.