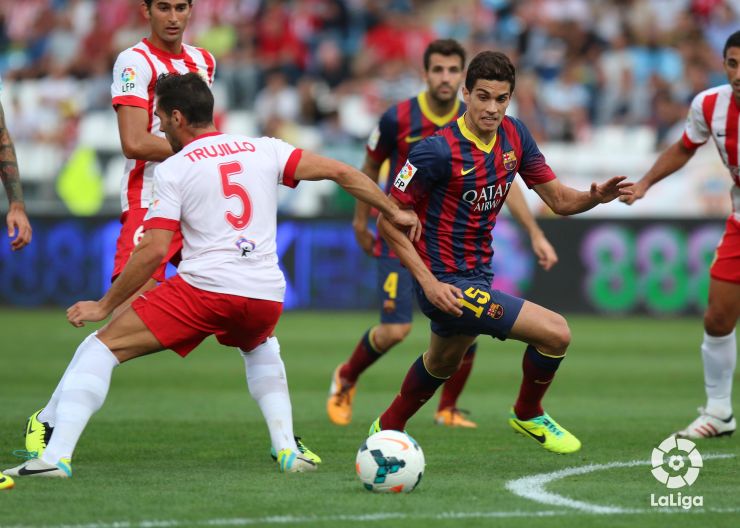 "Barça finished the first half of the season with flying colours"

Marc Bartra talks to LFP.es about FC Barcelona's first half of the season and his role in the team during the last few months.

It didn't take him long to carve out a position for himself in the Barcelona back line this season. His eagerness and energy has convinced Gerardo Martino that he has a lot to give the team. Now Marc Bartra (San Jaime dels Domenys, Tarragona, 15/1/1991) sits down with LFP.es to talk about the first half of the season and to reveal some of the blaugrana's key elements for the rest of the Liga BBVA campaign.

LFP.es: From one to ten what rating would you give the team for the first half of the season?  Marc Bartra: A good grade. There is still some way to go to achieve excellence, which is a big word. It took us a while to get going at the beginning and our level also dropped a bit, but now the team's confidence is high and everyone feels great after how well the last few months have gone.

LFP.es: What has been the most difficult game or the toughest opponent Barcelona has faced so far?  Bartra: In terms of quality and intensity, the most demanding games were against Real Madrid and Atlético, but I remember the trip to San Mamés being especially difficult. Athletic Club never make it easy for us and their fans are always on our backs as well. Away from the Liga BBVA, the match against Ajax stands out as a bad memory.

LFP.es: In past years the gap between second and third in the league was much bigger, but this season things are much tighter. Bartra: Atlético and Real Madrid are two great teams and they are especially strong this season. However, we have maintained a good level, we're on top of the league and everything is going to plan.

LFP.es: What do you think the key is to this season? Bartra: The key will be staying true to ourselves, keeping our level high and, above all else, not getting tired of winning. If we start dropping ridiculous points along the way, that might come back to haunt us. The desire that the manager instils in us will also be of fundamental importance for us staying top.

LFP.es: You are level on points with Atlético and have yet to beat them this season. What are you lacking to beat them or what is it that makes the Red and Whites so strong? Bartra:  Atlético is very good at closing things down in defence and not allowing the opposition to play. That makes them strong. As well as that, they are very direct and have no weaknesses across the pitch. That makes it even harder for us to break them down and cuts down on the amount of chances we can create.

LFP.es: Pedro Rodríguez, Alexis Sánchez, Neymar, Cesc Fàbregas and Lionel Messi. How does Gerardo Martino manage so many quality attacking players and keep everyone happy?  Bartra: Simply put he uses common sense and knows how to organise the group and do what needs to be done. He has been spot on with his decisions and hasn't been afraid to rotate players or take off the people most in form. And that is not an easy thing to do when you have so many good players up front.

LFP.es: He has not hesitated in starting the likes of Messi and Neymar on the bench or in giving you a start in important games. Bartra: He is very clear with his ideas and has made things so demanding that we are all competing at our best. That is the best things for the team at the end of the day because it keeps us all 100% motivated.

LFP.es: Let's talk a bit about you. You have put in some good performances and are beginning to make your mark on the team. Bartra: I'm doing my bit for the team and that is all thanks to the manager for believing in me. He made it clear from the start that he wasn't going to sign a centre back and instead decided to only use the 25 players already in the squad.

LFP.es: How has Marc Bartra matured on the pitch since the end of last season?  Bartra:  In terms of experience and physicality above all else. I have come on a long way in a short space of time and I see myself improving with each game. That's thanks to the minutes I'm getting and the confidence being shown in me this season.

LFP.es: What are your wishes for 2014?  Bartra: As many titles as possible. Although it will be very difficult, I think that when you're with Barca you have to be ambitious. It would be incredible to win all three titles again.