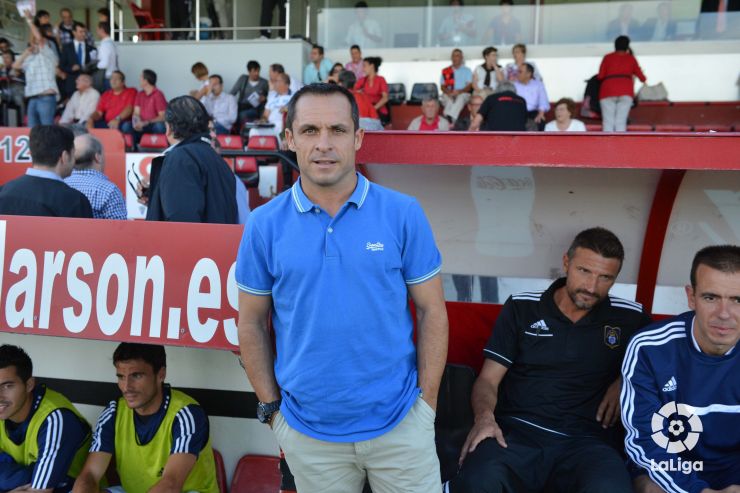 "Barça B is a tough opponent"

This Saturday the former Barcelona player Sergi Barjuan takes his Recreativo side to the Mini Estadi, where he started his footballing career.

Recreativo de Huelva coach Sergi Barjuan, who started out with the Barcelona youth academy before spending nearly a decade with the club as a left back, travels with his current side, who currently lie third in the Liga Adelante, to take on Barcelona B for matchday 27 of the season.

Although according to Sergi this "is not a match I have marked off on my calendar", the encounter in the Mini Estadi will be a special occasion for the Catalan who, as well as visiting the ground "where I began as a footballer", will also be taking on a lot of his old Juvenil B players, a side he took his first steps as a coach with between 2009 and 2011. Now as the Recreativo manager, Sergi is determined not to "slip away" from the upper part of the Liga Adelante table. LFP.es spoke with the 42-year-old coach ahead of the match against Barça B, a rival he has beaten in his previous three encounters as the manager of the Andalusian outfit.

LFP.es: Recreativo is doing very well in the Liga Adelante, and has even sat atop the table a few times this season. How would you assess the season so far?
Sergi: Things are going well. We have surpassed the expectations we set out for ourselves at the start of the season, and when you are at the top you don’t want to slip away. Now all the matches are very important for all the teams, especially in a league where anyone can move near the top or the bottom given that the differences between the sides are so minimal. You have to be fully alert in every game.

LFP.es: Is Recreativo looking to get promoted to the Liga BBVA?
Sergi: We are thinking along those lines. We have spent almost the entire season in the upper end of the table and we don’t want to slip away. We know that it is a very long and competitive league. There are teams in mid table who are due to improve and that will surely make the Liga Adelante less even than it is now.

LFP.es: The next opponent is Barça B, who despite losing to Real Madrid Castilla last weekend, seem to have improved over the last few games. What is your assessment of them?
Sergi: They will be a complicated opponent for us. It is a team that makes life difficult for its rivals, which plays beautiful football and always has players in attacking positions. Although they lost to Castilla, they have been on a very good run of form and are excellent both physically and mentally.

LFP.es: Having played alongside the current Barça B coach, Eusebio Sacristán (1993-1995), and knowing the club as a former player, how will you approach this game in Barcelona?
Sergi: I’ll treat it like any other game. I don’t have any personal goals I obsess over. Perhaps during the first match we played last year, my first year as a professional coach and a year I had to face Barça B, I was a bit nervous, but now I’m treating it like any other game. I approach it with the uneasiness of knowing that it is a team which can cause you all kinds of problems on its day, with the uneasiness of knowing that they have great players who you can’t give any space to… but on a personal level I have not marked this game off on my calendar. It is special because I get to return to the Mini Estadi, where I began as a footballer and where I played a lot of matches.

LFP.es: What memories do you have of being the Barca Juvenil B coach, when you began your career in the dugout?
Sergi: I have very fond memories. In fact about half of the players who are now playing with Barça B were with me three years ago. They were my players and I know them very well. At Barça you are given all kinds of advice and insights that you can use later. That’s what I did. Understanding the philosophy, and given that I started my career there and played for the first team, it was easy for me to communicate the club’s message.