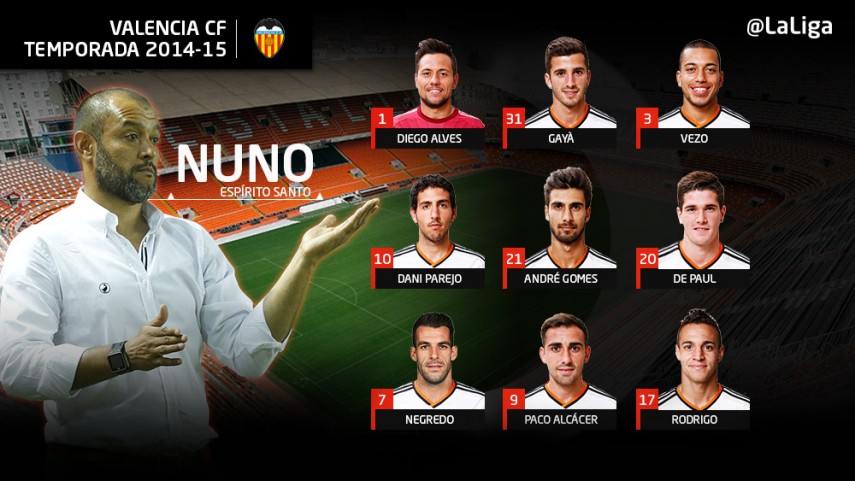 Back to the top

The reinvigorated team from the Mestalla, with eleven new signings and youth on their side, are determined to return to the top end of the Liga BBVA under the orders of Nuno.

Tornem (We return). A single word, a warning and a declaration of intentions for the 2014/15 season. It is the motto of Valencia CF, who are out of the European competitions for the first time in sixteen years. Eleven new faces have arrived in Valencia to help achieve a sought-after comeback, together with manager Nuno Espírito Santo.

In addition, the Blanquinegros have the unconditional support of 36,000 season-ticket holders. The figure is a reflection of the enthusiasm generated among the fans by the changes in the dressing room. The number is 3,000 greater than last season and brings an end to a downward trend that started a few years ago, despite the lack of European competition.

Only two players, Javi Fuego and João Pereira are over 30 years of age

The youngest team in the Liga BBVA

If there is one thing that characterises the squad, it is the average age of 23.7 years, making it the youngest group of the 20 competing in the Spanish topflight. Only two players are over 30 years of age (João Pereira and Javi Fuego) and fourteen players are yet to celebrate a quarter of a century.

However, this youth does not equate to inexperience. The baby of the squad, 19-year-old José Luis Gayà, has played for the Spanish Under-19s. Beside him, Jaume Doménech, Robert Ibáñez, Carles Gil and Paco Alcácer all represent the Paterna academy in the first-team squad.

Rock solid at the back (goalkeeper and defence)

Despite the exit of Vicente Guaita, Diego Alves will not be lacking competition between the sticks. The Liga BBVA's best penalty stopper will have to battle it out with an enthusiastic and ambitious Yoel González, who recently arrived from RC Celta de Vigo, and with academy player Jaume Doménech. Valencia's goal is in safe hands once again this season.

Nuno has a pleasant dilemma in his rear-guard, the Portuguese manager has two players per position and three in the case of the right-back. From world champions like Shkodran Mustafi to young guns who, match by match, are becoming the real deal, such as Rubén Vezo.

Dani Parejo is the standard-bearer of the Ché's midfield. The player from Madrid, with the number 10 on his back and the captain's armband on his sleeve, will undoubtedly pull the strings from the centre of the pitch. Javi Fuego and Filipe Augusto are destined to be the unsung heroes of the team as they do the invaluable job of protecting the back line.

Fans in the Mestalla will enjoy the skills, mobility and sharp shooting of Rodrigo de Paul and André Gomes, the new number 21, a magic shirt number at Valencia, as David Silva and Pablo César Aimar, among others, have previously graced it. Alongside the newcomers are the experienced Sofiane Feghouli and Pablo Piatti, the Argentinian has started the Liga BBVA by scoring goals as a regular in the starting line-up.

Alcácer, Negredo and Rodrigo form a thrilling three-pronged attack in the Mestalla

Spanish dynamite in the strikeforce

When the clock almost read 00:00 on Tuesday 2 September, Valencia announced their final signing. The day before, the manager declared in a press conference that: "A potent striker will be added". Álvaro Negredo, the explosive striker who had all Valencia fans on the edge of their seats, arrived and was presented to 12,000 people in the Mestalla. The ex-Manchester City player will form a trio with Rodrigo Moreno and Paco Alcácer.

At 21 years of age, the latter has become a stalwart for the team. A Torrent native, he has worn the black and white shirt since he was a kid. Last year he had the fans in raptures with his goals in the comeback against FC Basel 1893 and this season he is looking to establish himself: he has made his debut with Spain, and did so in the best way possible, by finding the back of the net. With the number 9 on his back and a stunning strikeforce around him, he is guaranteed to frequently have the Mestalla faithful out of their seats.