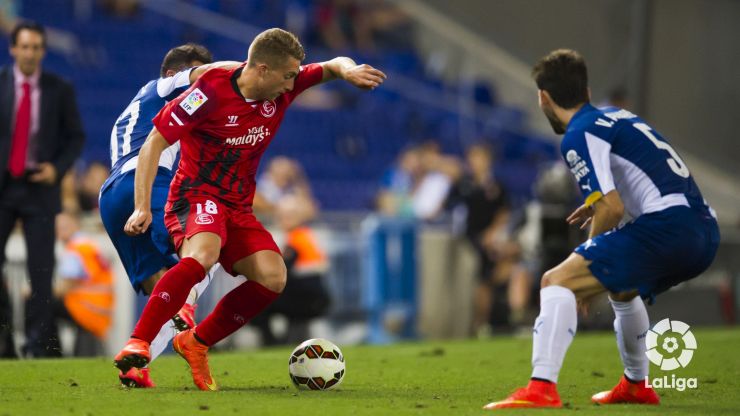 The Andalusians beat Espanyol 1-2 with goals from the Colombian forward and the Valencia-born midfielder, and now have four points on the board.

Sevilla FC beat RCD Espanyol 1-2 as part of the Liga BBVA matchday 2 action. Thanks to goals from Carlos Bacca and Vicente Iborra, on either side of half time, the Andalusians overcame the challenge of the Catalans, who found the back of the net through Christian Stuani.

The game got off to an exciting start with Sergio García almost opening up the scoring with a shot that ricocheted off the post. After an even few minutes, Sevilla took the lead courtesy of Carlos Bacca in the 34th minute. The Colombian striker's speed and astuteness allowed him to get in behind the Espanyol backline and finish off a ball whipped in from the right by Coke.

After the half-time break, Sevilla kept up the intensity and continually looked to increase their lead. They did so in the 57th minute, when Vicente Iborra got on the end of a Denis Suárez free kick to make it 2-0 with a powerful header. However, Stuani narrowed the gap just five minutes later, making the end of the match an open affair. Despite Espanyol’s best efforts, the Andalusians held onto their lead to ensure they took all three points home with them.