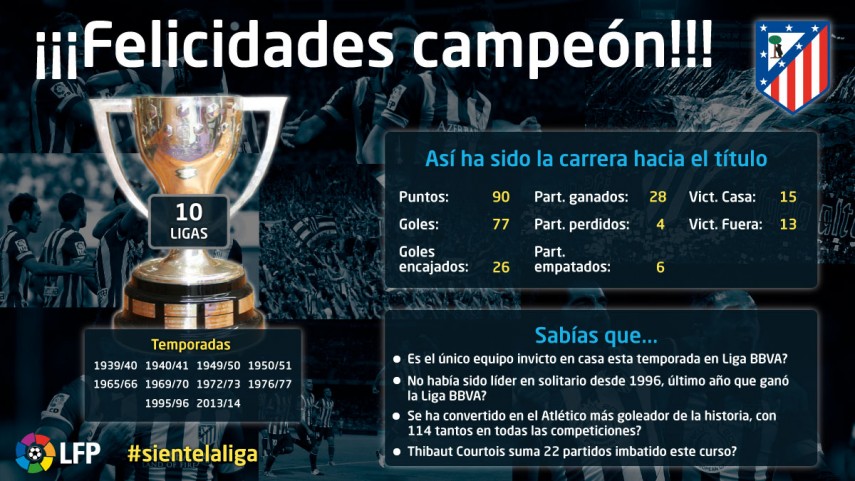 The 'rojiblancos' win their thenth LIGA BBVA title after drawing with Barcelona in the Camp Nou and capping off a record-breaking season.

The champions of this 2013/14 Liga BBVA have been crowned. Club Atletico de Madrid claimed the title after 38 matchdays, with 28 wins, 77 goals and 90 points against FC Barcelona. They have done so game by game, loyal to the philosophy of their coach, Diego Simeone, one of the main reasons behind their triumph.

Strength and consistency have helped the side maintain their place at the top of the league, a position they hadn't held since 1996, when they won their last title.

The Red and Whites fought for the title from the first whistle of the season and they showed that this season they had a burning desire to win. They scored 14 goals in the first four weeks, and downed Real Madrid CF in the derby during the seventh round of games.

They were leaders at the halfway point of the season when all sides had played each other once, alongside FC Barcelona, the side the side who they also shared the top spot with in February, when Atleti lead Liga BBVA for the first time in 18 years.

Not even defeats to RCD Espanyol (1-0), UD Almería (2-0), CA Osasuna (3-0) and Levante UD (2-0) changed the winning mentality that the side have shown over the past nine months of compeition. Injuries helped to motivated the side, who looked fatigued at certain points of the season.

They came through with their pride and desire to prove themselves in the world's most demanding league. The one in which, until the penultimate round of games, three sides had fought out for the title which Simeone's men eventually took with one game left to play.

Atlético have sent shockwaves across Europe, something which is largely due to their star players. 21 year-old Thibaut Courtois has kept 22 clean sheets, Koke Resurrección has shown his potential as a rising star of Spanish football, Gabi Fernández has shown his experience under Simeone's guise, whilst Diego Costa has caused problems for all opposition defences, scoring 27 goals and is fighting for the top goalscorer gong with Leo Messi and Cristiano Ronaldo.

There's little doubt that this league title closes off a dream season for the side from the Spanish capital, who are on top of the footballing world. The next stop is the UEFA Champions League final on the 24th of May in Lisbon against Real Madrid CF, and then attention will turn to retaining the Liga BBVA crown, next season.