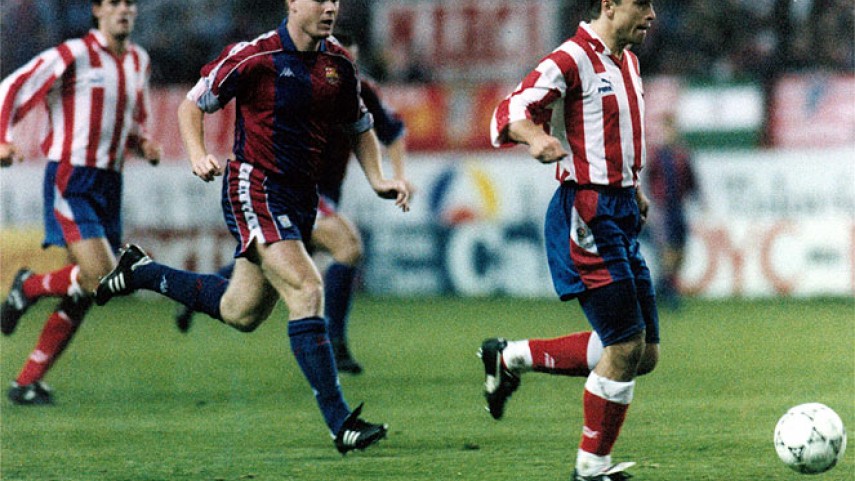 Atlético vs. Barcelona, a clash with plenty of history

Some of the past encounters between Atlético and Barcelona sit long in the memory of Spanish football.

The fight for the Liga BBVA title makes its way to the Vicente Calderón this Saturday as Atlético Madrid takes on FC Barcelona in what will be one of the most hotly disputed matches of the season. The great form both sides are enjoying brings us back to some of the most important clashes between the teams, which have gone down in Spanish footballing folklore.

The home side will be hoping for a repeat of the result from the 1995/96 season, a magical year for the Red and Whites as they came out on top in two crucial encounters with the Catalans on their way to winning the Liga BBVA and the Copa del Rey.

On the 10th of April 1996 Radomir Antić’s side took on the blaugrana in La Romareda to decide the final of the Cup competition. The match was decided in the 102nd minute with a Milinko Pantić header, a goal that sealed a ninth title in the competition for Atlético.

The teams met again just ten days later, this time in the Camp Nou where Barcelona was out for revenge. However, goals by Roberto Fresnedoso, Juan Vizcaíno and Leonardo Biagini cancelled out Jordi Cruyff’s and the 3-1 win for the visitors put an end to the Catalans’ hopes and moved the Madrid outfit even closer to the league title.

Also living long in the memory of the Red and Whites is the famous comeback in the Vicente Calderón during the 1993/94 season, when the home side went 3-0 behind in the first half only for Romario to level matters with a hat-trick after the break. Pushed on by the home support, Atlético managed to make it 4-3, one of the Madrid team’s greatest ever results at home, where this weekend’s clash will take place.

Barcelona, for its part, has been able to get the upper hand over this season’s most direct rival over the past few years. The biggest thrashing it gave the Madrid outfit in the Liga BBVA as visitors was during the 2006/07 season, when a Frank Rijkaard team in full-flow subjected the home side to a 6-0 defeat.

Also, fresh in the memories of both teams is their last meeting, in which Gerardo 'Tata' Martino’s side just about overcame Diego Simeone’s to win the Spanish Super Cup on the 28th of August 2013. The Catalans were able to successfully defend the 1-1 result obtained in the Vicente Calderón, which came courtesy of a Neymar goal during the Brazilian’s debut for club. That goal was enough to give Barcelona its first piece of silverware of the 2013/14 campaign.