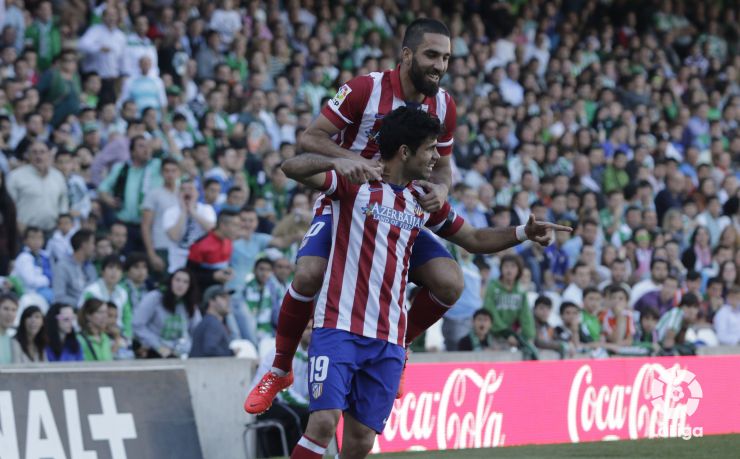 The rojiblancos' win over Betis proved priceless as, thanks to Real Madrid’s defeat at the hands of Barcelona (3-4), they end the weekend at the top of the Liga BBVA.

Club Atlético de Madrid was the greatest benefactor of the result of the clash between Real Madrid CF and FC Barcelona on matchday 29 of the Liga BBVA. The rojiblancos top the table, equal on 70 points with the Whites, closely followed by the Catalan outfit with one fewer. In addition, Sevilla FC move into the European spots, while Real Betis Balompié still prop up the table.

The Clásico lived up to the hype and delivered the thrills and goals predicted before the game. The azulgranas beat their nemesis 4-3 in the Santiago Bernabéu to close in on the leaders and set alight the fight at the top of the table. Three goals from Leo Messi and another from Andrés Iniesta overshadowed two from Karim Benzema and a third from Cristiano Ronaldo, who scored from the penalty-spot.

For their part, Gabi and Diego Costa, who scored his twenty-third goal of the season, kept Atlético’s dream alive, as they end the weekend atop the table. The rojiblancos beat Betis (2-0) despite a match that was, for the most part, very close. The verdiblancos’ defeat means that a climb towards salvation is looking increasing unlikely.

In the fight for Europe, Sevilla await Real Sociedad de Fútbol’s result, but for the time being they occupy fifth place after victory over CA Osasuna (2-1), who are just two points away from the relegation zone. Elsewhere, Villarreal CF, who lost in the Mestalla, remain in seventh place with 45 points. Valencia saw off the Yellows in their derby thanks to a brace from Javi Fuego.