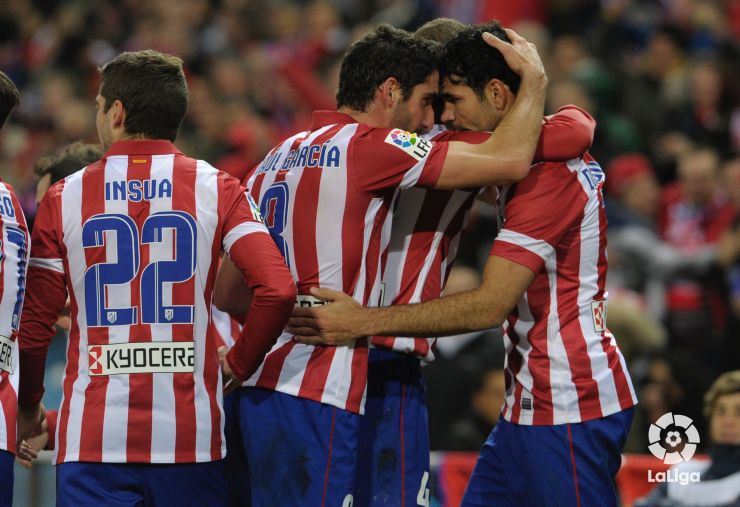 Simeone’s men hammer Real Sociedad to move up to first place. Real Madrid drew at San Mamés and are third.

The 22nd round of Liga BBVA was noted for the final farewell that Spanish football gave to the late Luis Aragonés, who passed away aged 75 on Saturday. Also prominent was the change at the top. FC Barcelona’s defeat to Valencia CF, and Club Atlético de Madrid’s win means that the Red and Whites are the new leaders of Liga BBVA, a position they have not occupied since the 25th of May 1996.

Atlético did not miss out on the opportunity to go top following Barcelona’s slip-up on Saturday. The side from the capital authoritatively showed their title credentials against Real Sociedad de Fútbol, winning 4-0 thanks to goals from David Villa, Diego Costa, João Mirando and Diego Ribas in his second debut for the club. The Txuri-urdin, despite the defeat, remain in the European places.

Real Madrid and Athletic Club played out one of the ties of the round. San Mamés saw intensity, rhythm, and top quality football as Real Madrid conceded their first goal in 2014. Ernesto Valverde’s men showed that their stadium, which along with only the Vicente Calderón has yet to witness a home defeat, is a fortress. Jesé Rodríguez and Ibai Gómez, playing his 100th game for the Basque outfit, were the scorers as the draw leaves the visitors third and Athletic fourth.

It was a good night for Real Betis who, with two Rubén Castro goals, secured only their third win of the season. New signings Alfred N’Diaye and Antonio Adán started their first games and helped the Andalusian side secure three points that breathe life into their fight for survival. RCD Espanyol, who were downed by Betis, finished the day in 10th place.

In Sunday’s first game, Elche beat UD Almería. Fran Escribá’s side move away from the danger zone whilst Almería finish the weekend two points above Real Valladolid, who occupy the final relegation spot.