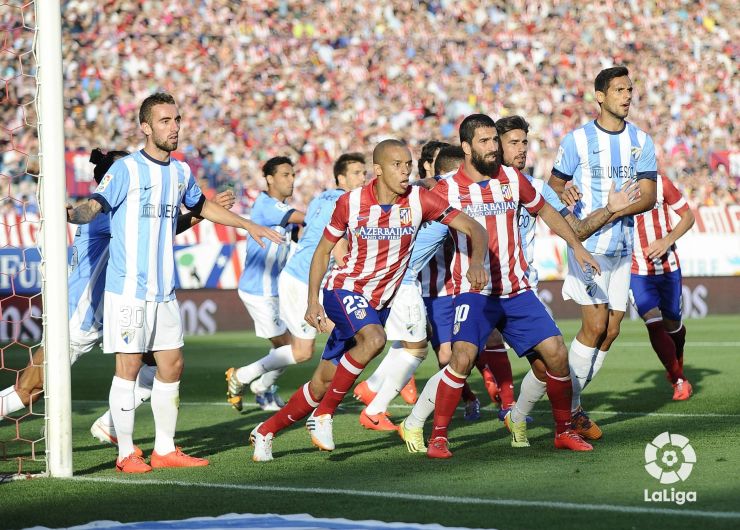 Atlético, one goal from glory

The draw against Málaga left the rojiblancos one goal away from the Liga BBVA title, after the spoils were shared between Barcelona and Elche. Simeone’s men will be playing for La Liga on the last day of the season in an all-or-nothing clash against the azulgranas.

The one-all draw between Club Atlético de Madrid and Málaga CF on the penultimate matchday of the Liga BBVA was an edge-of-the-seat thriller. The rojiblancos will now be playing for the title in a huge match against FC Barcelona on the last matchday.

The Vicente Calderón was packed to the rafters on an afternoon that was not suitable for the feint-hearted. The two teams set a high tempo and both went in search of goal from kick-off. It was Diego Simeone’s side who had the best chances in the first half, but their finishing lacked precision.

The best opportunity fell to David Villa, who crashed the ball into the bar 13 minutes into the first half. The Andalusians relied on consistency and patience in their quest for goal, but like the home team, they went into the break without reward.

Thibaut Courtois was called upon early in the second half. The Belgian keeper kept Vitorino Antunes from opening the scoring with an outstanding stop. He was unable to help minutes later though, when Samu opened the scoring after 66 minutes. Atlético took another pop at Willy Caballero’s goal and this time found an equaliser. Alderweireld’s goal made for a thrilling end to this Liga BBVA encounter and the dying minutes were riddled with nerves.

A goal would have given the rojiblancos the title because of FC Barcelona’s draw against Elche, but it never came. Seconds from the final whistle, Adrián had a superb chance, but Caballero saved Málaga once again.