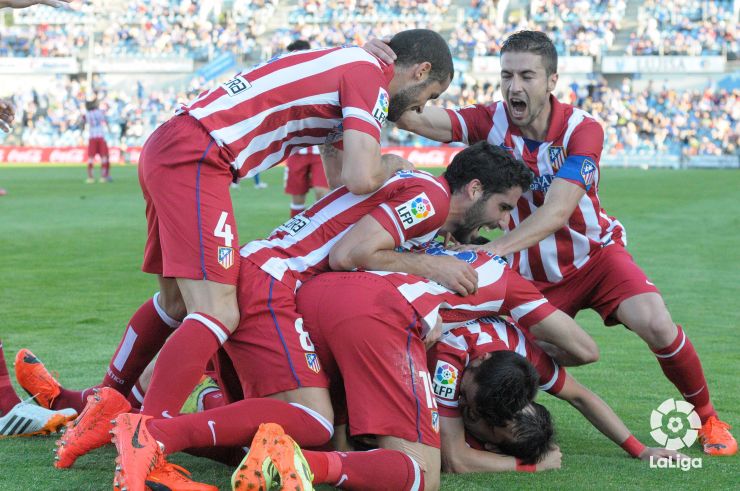 Atlético keep the pressure on

The rojiblancos earned a well crafted 2-0 victory against Getafe through goals from Diego Godín and Diego Costa.

Club Atlético de Madrid continue their winning ways with a 0-2 victory over Getafe CF on matchday 33 of the Liga BBVA. Thanks to goals from Diego Godín and Diego Costa, one in each half, the rojiblancos stay top with a three point lead over Real Madrid CF.

Against a brave and well positioned opposition, Diego Simeone's side had to use the air to surprise their opponents. In the 40th minute a Juanfran Torres ball from out wide found Godín, who opened the scoring with a good header. A goal of the kind they call "psychological", after the score remaining on 0-0 for almost the whole first half.

After the break, Juan Rodríguez had a golden opportunity to equalise with another great header, but keeper Thibaut Courtois was fortunate to prevent it. Atlético had another chance to extend their lead when Ángel Lafita fouled João Miranda in the box and the home player was sent off, but Diego Costa was stopped twice by Jordi Codina. Costa himself scored the goal that made it 0-2 with a low drive off a cross from Adrián López, but put a dampener on the afternoon when he crashed into to the post and had to leave the field on a stretcher.