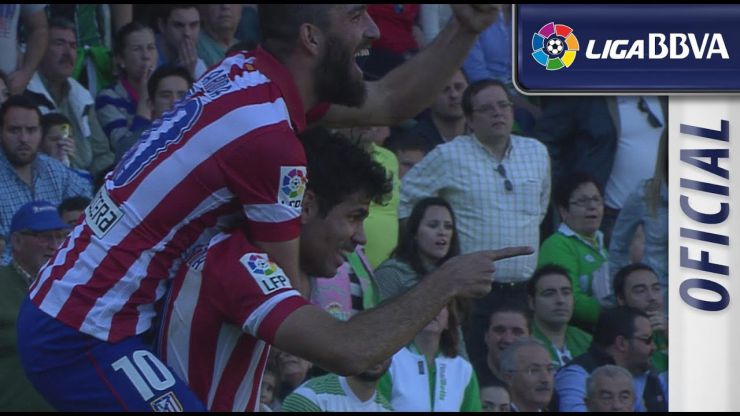 Atlético give Betis no chance

The rojiblancos climbed to the peak of the table with a 2-0 win over the Andalusians, to draw level on points with Real Madrid, who take on Barcelona this evening.

Club Atlético de Madrid have taken a provisional lead in the Liga BBVA after defeating Real Betis Balompié 2-0 with goals from Gabi and Diego Costa. The result puts the pressure on Real Madrid CF, who face FC Barcelona on Sunday evening.

It was an intense first half between the Andalusian outfit and the side from the capital. The home team, who were looking to redeem their elimination from the UEFA Europa League, did not want to lose ground in the fight for salvation, while the rojiblancos were bidding to draw closer to the Whites at the top of the table. The midfield battle did not allow for many chances on goal and the deadlock held until half time.

The break did little to change the dynamic of the game until midfielder Gabi launched a shot from outside the box to give Atlético the lead. Soon after came the turn of Diego Costa, who latched on to a sublime ball from Koke to seal a victory for the visitors with his 23rd goal of the season. Despite their best efforts, the home team could find no answer and had to accept their first defeat in their last four matches in the competition.