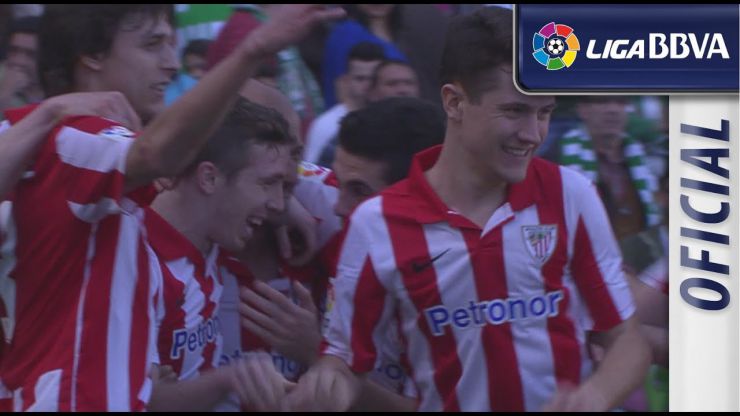 Athletic win at the Benito Villamarín

Goals from Iker Muniain and Guillermo sealed the victory for the rojiblancos, who remain in fourth place with 47 points.

Athletic beat Real Betis Balompié 0-2 on the 25th matchday of the Liga BBVA. The Basque team retain their UEGA Champions League qualifying spot and a four-point lead over Real Sociedad de Fútbol. Meanwhile, the situation of the home team gets complicated and they remain rooted to the bottom spot.

Ernesto Valverde's side dominated the game in the first half and had the best chances on goal. Ten minutes in goalkeeper Antonio Adán won a head-to-head with Kike Sola that could have been the first goal for the visitors. Mikel San José also had a great opportunity but the first goal for the Bilbao team came when the referee gave a penalty after Damien Perquis took down Sola. Muniain converted it to go 0-1. The Betis defender was sent off after another hard tackle on Mikel Balenziaga, minutes before the break.

In the second half, Lolo Reyes received a second yellow card and Betis were left with nine players. The rojiblancos took advantage of the situation and scored their second goal as soon as he left the field, making it 0-2. The Bilbao forward scored his first goal for the rojiblancos and sealed a match that keeps Athletic’s dream to qualify for the Champions League alive.