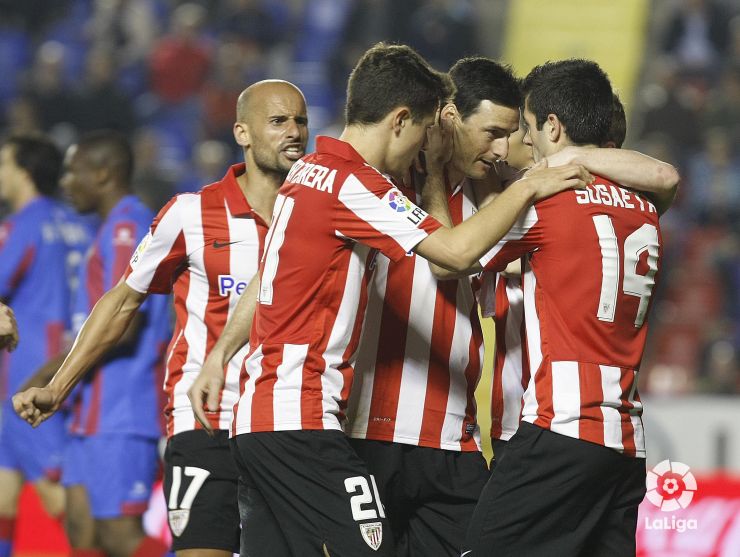 Athletic strengthens its fourth place in the Ciutat

The rojiblancos beat Levante 2-1 in its own stadium to move six points ahead of fifth-place Sevilla.

Athletic Club beat Levante UD 2-1 in the game that closed out matchday 32 of the Liga BBVA. With the win, the rojiblancos keep their fourth place with 59 points, leaving the granotas in tenth with 40.

The clash was very one sided at the start as Athletic dominated. The visitors came out of the blocks with more intensity and, as well as possession, they enjoyed some dangerous attacks. In one of them, midfielder Iker Muniain delved into the box, where he was brought down, but centre-back Mikel San José failed to convert the resulting penalty. However, it was not long before striker Aritz Aduriz scored his team’s first after his shot deflected off a defender. It was Aduriz again whose header made it 0-2 on the brink of half-time.

After the restart, Levante took to the pitch with a different attitude, cranking up their intensity for the second 45 minutes. The result of the change was a goal for the granotas. Home midfielder Rubén García, who switched wings in the second half, snuck in from the right and his shot glanced off centre-back San José before finding the back of Gorka Iraizoz’s net. From that moment, and until the end of the match, Joaquín Caparrós’ team were determined to equalise, but the scoreboard remained unchanged.