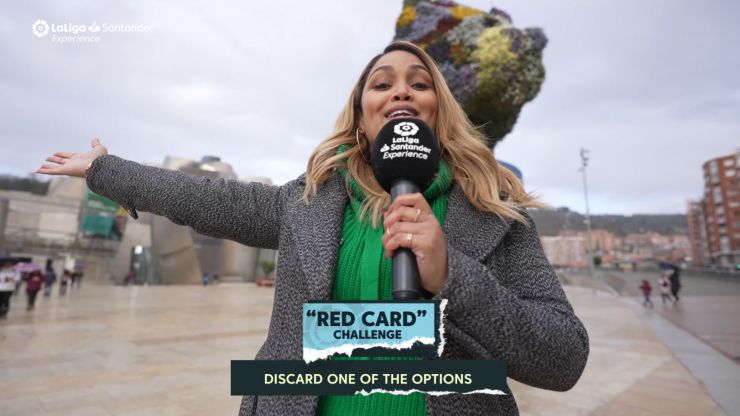 The LaLiga Experience's guests enjoyed a series of challenges and a wonderful adventure in Bilbao, which they combined with the city’s truly exceptional local cuisine

The guests of the LaLiga Experience felt the pressure as soon as they set foot in the capital of Biscay, on the same day when they were unveiled as the new 'managers' of Athletic Club, as they competed for the title of Top Winner in this thrilling experience.

Chuey Chu (SuperSport Nigeria) notched up the first victory in the 'Red Light, White Light' challenge, a fun game which rewarded speed and reflexes. It was overseen by Julia Stuart (SuperSport South Africa), who operated the red-and-white traffic light which allowed them to advance or forced them to stop until they caught up with her. Luck appeared to be on Chuey's side, as he went on to proclaim himself champion of the 'True or False Penalty Challenge', using the ball to answer questions about LaLiga and Athletic.

However, not everything was a competition. Bilbao was waiting patiently for the LaLiga Experience's visitors to take in its streets, people and food. They had a fantastic time touring the city, sampling its famous pintxos, becoming expert txakoli tasters, and visiting San Juan de Gaztelugatxe, a magical place which served as a backdrop to one of the biggest TV series in recent years.

In front of the Guggenheim Museum and flanked by its 'Puppy', they contested the final challenge to decide the winner of this edition’s experience. The red card was the key to eliminating one of the four incorrect options in the questions which we put to them, with Mikael Karlsson emerging as the victor.

Jabo Irureta and Manolo Delgado presented Chuey with the award for the winner of this experience, held in an exceptional location, the San Mamés stadium.