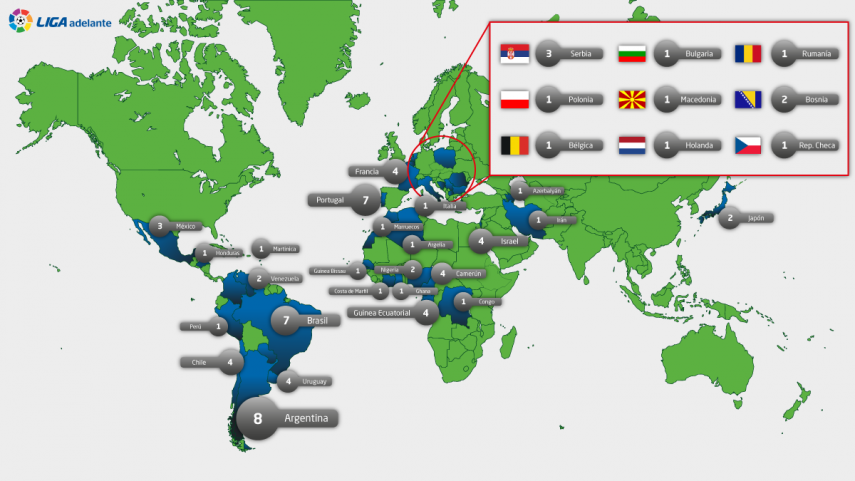 Around the world with the Liga Adelante

Argentina, Portugal and Brazil are the best represented countries in a championship that includes 33 different nationalities.

The Liga Adelante is not just known for its goals. Another of its great attractions is the blend of cultures, flavours and styles provided by the more than 30 countries that are present in the competition. The competitiveness and intensity of the schedule mean that an increasing number of players are deciding to make the move to Spain and join the Liga Adelante, the tightest league in the world.

The greatest exponents of this are RCD Mallorca and RC Deportivo de la Coruña, who both have 8 foreign players in their teams, making up more than 30 per cent of the squad. At the other end of the scale, Girona FC and CD Tenerife are the only two Liga Adelante clubs with exclusively home-grown players.

Among the 22 teams that form the Liga Adelante, as many as 33 different nationalities can be found. The most common are Argentinian (8) and Portuguese (7), largely due to the similarity of the cultures and the existing connections between the countries, making adaptation simple for the players.

For the same reason, it is the Latin American countries that supply the greatest number of players to the Liga Adelante. As many as 9 nations from that continent take part in Spanish football, including Uruguay, with Hernán Menosse, Adrián Gunino, Leandro Cabrera and Guillermo Méndez, and Venezuela, with Julio Álvarez and Josmar Zambrano.

These are followed by several African and Asian nationalities which, to the surprise of many, are also high in the ranking. This is the case of Equatorial Guinea, Cameroon and Israel, with four representatives each, and Japan, who have two players in the competition. There are also players such as Jean-Sylvain Babin and Cezary Wilk who represent Martinique and Poland. Algeria, the Ivory Coast, Belgium and Italy only have one man each in the Segunda División.

In addition, many of the stars have dual nationalities and are eligible to represent different national sides, such as, for example, Real Madrid Castilla midfielder Omar Mascarell, who could play for Spain or Equatorial Guinea, and CD Lugo's Vincenzo Rennella, who is available to pull on the shirt of Mexico or Italy. In total, 46 Liga Adelante players have passports from different countries, bringing their own touch of colour to the competition.