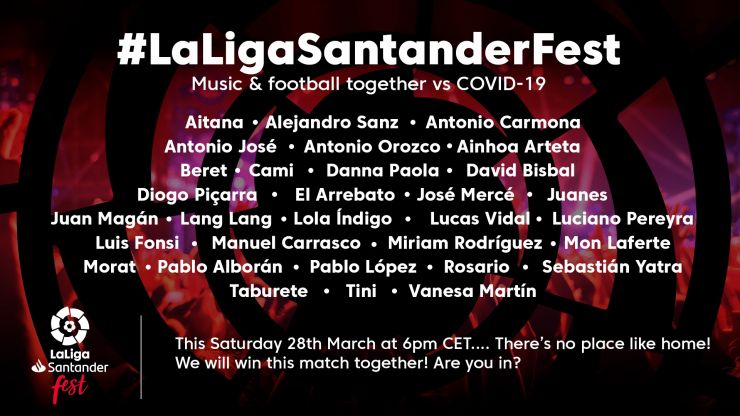 The event seeks to raise funds for medical supplies, whilst boosting fans' spirits during this period of quarantine. Eva Gonzalez and Toni Aguilar will host the festival with an appearance from Rafa Nadal.

Over 50 artists and footballers are poised to come together tomorrow, Saturday, to take part in ‘LaLiga Santander Fest’, a global charity festival organised by LaLiga in partnership with Santander Bank, Universal Music Group and the rest of the league's sponsors, as well as players, clubs, artists and GTS. The aim of the macro-concert is twofold, with the event having been organised to raise funds for the purchase of medical supplies in the battle against the COVID-19 pandemic and to also support fans confined to their homes during the current period of quarantine.

This is the context behind this charity music extravaganza, which will be broadcast in more than 180 countries simultaneously. Kicking off at 18:00 (CET), it will bring together 20 international artists and more than as many players from across the 20 LaLiga Santander clubs. The concert's star-studded line-up features the following talents:

The charity festival, which combines sport and music to lead the fight against COVID-19, has attracted the support of well-known personalities from across both industries, including event hosts Eva Gonzalez and Toni Aguilar and tennis star Rafa Nadal, who will take part in his role as a Santander Bank ambassador. The event, which will see all celebrities participate directly from their homes, promises to offer up no shortage of surprises.

‘LaLiga Santander Fest’ will be beamed out live across the world by Movistar LaLiga, GOL TV and LaLiga international broadcasters. In addition, the concert will be streamed via LaLiga's social media channels and can be followed on YouTube, Facebook, the social networks of Santander Bank and the league’s global OTT platform, LaLigaSportsTV.

LaLiga President, Javier Tebas said: "This initiative has really become something special. We've got the best artists, clubs and players and the best fans around too. Together we'll succeed in convincing people about the importance of staying at home at this time, whilst raising money to buy medical supplies, which are in such high demand at times like these. I want to thank Universal Music Group, Santander Bank and all of our sponsors for giving their all to make this LaLiga project a reality."

For his part, Rami Aboukhair, country head for Santander Spain, commented: "It is admirable to see how, in these very complex moments, a supportive spirit has emerged in our society that comforts us all. At Santander Bank, we share this spirit of cooperation and generosity, convinced that we will come out of this process even stronger as a country. That is why, with the help of LaLiga we have created ‘LaLigaSantander Fest’ and together with the players, football and music fans, we want to continue helping our health institutions. We will start this process with the purchase and donation of 1 million masks that will be added to the rest of the sanitary material that will be purchased with the funds raised by this festival”.

Meanwhile, Narcís Rebollo, President of Universal Music Group for Spain and Portugal, added: "Universal Music Group and GTS are deeply proud to participate in this wonderful initiative together with LaLiga. 'LaLiga Santander Fest' unites two of the aspects of life that most contribute to people's leisure and well-being: music and sport. At this time of enormous uncertainty and concern about the terrible impact of the COVID-19 pandemic, which has been particularly hard in Spain, the ability to bring music and sports to every home is now our priority commitment as leading companies in the entertainment sector.”

He added: "This innovative and extraordinary charity event has an economic and social objective, which is to raise as many funds as possible to combat the pandemic, but it also has a more emotional one: to create a bond of union through sport and music among all the people who are confined to their homes right now. This could not have been carried out without the totally selfless support and solidarity of athletes and artists who once again demonstrate that in addition to being true number ones in their professions, they are also great people. We give all our thanks to them. We hope to contribute, from our homes, to making this Saturday evening as full of celebration and joy as possible.”

In addition to making the quarantine more bearable for those who cannot leave their homes, ‘LaLiga Santander Fest’ seeks to raise funds for the acquisition of medical supplies.

For those users who wish to make donations from anywhere in the world, they can go to www.laliga.com/laligasantanderfest where they will find all the information on how to contribute to the initiative. Donations could be made as of this morning.

All funds will be donated, via the Santander Bank's Foundation, to help alleviate the impact of the COVID-19 pandemic. The majority of the amount raised will go towards the purchase of medical supplies and, in a coordinated effort with the High Sports Council (CSD), will focus on the government's medical priorities. A smaller sum will be donated to the #SaldremosJuntos (We'll get through this together) project, a programme launched by Atlético de Madrid’s Saul Ñiguez along with a group of athletes, journalists, influencers and designers who are keen to help the small and medium-sized businesses and self-employed workers in Spain that have been affected by COVID-19.