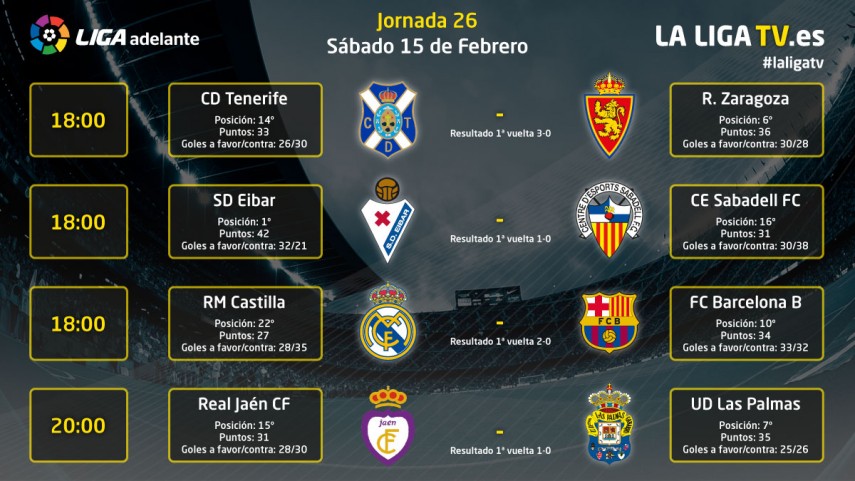 An exciting Saturday of action for La Liga TV

LFP.es' new platform will show four games, among which are the mouth-watering fixtures involving Liga Adelante table toppers Eibar, as well as the mini Clásico between Castilla and Barcelona B.

There is a truly exciting weekend of football ahead for LFP.es and La Liga TV. Four games will kick off Saturday’s Liga Adelante matchday 26 action. At 6pm the league leaders Eibar take on Sabadell in the Ipurua Municipal Stadium to defend the top spot they claimed last weekend.

One of Saturday's most mouth-watering ties involves a mini Clásico as the Madrid and Barcelona reserve sides go head-to-head, also at 6pm. Real Madrid Castilla play host to Barcelona B in a special clash in which the home side will be looking for points in order to climb out of the danger zone. The Catalans, who lay tenth in the league, have won back-to-back games and will be hoping to continue their good run of form in the Spanish capital.

Another match kicking off at 6pm sees Tenerife take on a Real Zaragoza team in need of all three points to make up for losing its last two games. Saturday's action closes in the Nuevo Estadio de La Victoria with 15th placed Real Jaén taking on a Las Palmas team just one point off the play-off spots.