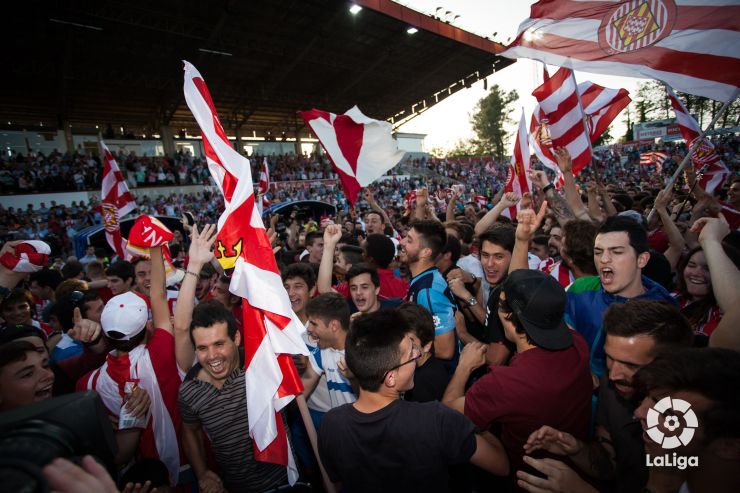 An afternoon of celebration and drama in the Liga Adelante

Five teams managed to stay up on the final matchday, while Mirandés, Castilla and Jaén were unable to avoid the drop.

The final episode of the Liga Adelante brought with it various contrasting emotions. From the explosion of joy for the five teams that sealed their place in the division for next season, to the tears of the three teams who will accompany Hércules CF on their way down to the Segunda División B.

Girona FC was one of the teams that saved themselves in their last match with a convincing 3-1 win over RC Deportivo de La Coruña. The flags were flying in the Estadio Municipal de Montilivi in support of a team who rewarded their fans with an unforgettable afternoon. Alfredo Ortuño, Felipe Sanchón and Eloi Amagat got the goals for Pablo Machín's side, who started matchday 42 in the relegation zone but see out the season in 16th place.

RCD Mallorca, SD Ponferradina and CD Lugo will also be playing Liga Adelante football next year. The Balearic side achieved its objective with a goalless draw against Córdoba CF, while the team from El Bierzo did the same despite falling 3-2 to UD Las Palmas. The Galician team had a far more dramatic game, beating CD Mirandés 1-0 and sentencing them to relegation.

It was bad news for Real Madrid Castilla too, as they lost 1-0 to Real Murcia CF and will also go down. The Whites' reserves, who were in the safety zone before the match, fell to twentieth position after wins from Girona and Alavés, two of their closest rivals.

The most frantic and thrilling match was that of Real Jaén CF and the side from Vitoria in the Nuevo Estadio de La Victoria, where the loser would be saying their goodbyes to the Liga Adelante. When it looked like the Andalusians had done enough, winning 1-0 until late in the match, things got hectic in a finish that was not for the faint hearted. In just two minutes, between the 84th and 86th, the Basque team turned the match on its head with two goals from Juanma Ortiz and Mauro Quiroga. There was even more drama as Nino made it 2-2 when the clock read 89, with which both teams would have been relegated, but Guzmán Casaseca managed to make it 3-2 in added time to save Alavés in the most dramatic of fashions.