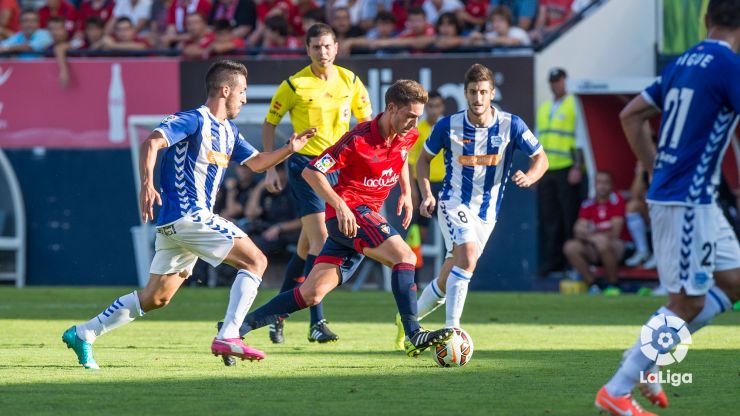 Alavés come out on top at El Sadar

The team from Vitoria, who returned to Osasuna’s ground for the first time in eight years, overcame the Navarrese side by 1-3.

Deportivo Alavés claimed the three points on their visit to El Sadar after beating CA Osasuna 1-3 on matchday 3 of the Liga Adelante. Juli, from the penalty spot, Ion Vélez and Migue scored the visitors’ goals, while Javad Nekounam bagged one for the home side.

It was a first half in which the Navarrese team and the Vitoria side took turns. Juli broke the deadlock from the spot on 13 minutes when he converted a penalty committed by Jon Echaide on Marco Sangalli. Osasuna tried to fight back, playing wide with good displays from Sisi and Miguel De las Cuevas, but none of their attempts were converted into goals. With this scenario, it was Nino, the Rojillo striker, who could have equalised, but a good save from Manu Fernández prevented the home side from scoring just before the break.

The second half brought lots of goals. As soon as it got underway, Alavés put the game beyond their opponents' reach with goals from Ion Vélez and Migue. The scoreline settled the team from Vitoria and they fell back and waited for their opponents to come forward. Javad Nekounam narrowed the gap with half an hour to go from the penalty spot to make it 1-3, but the visitors went away with their first victory of the 14/15 season.