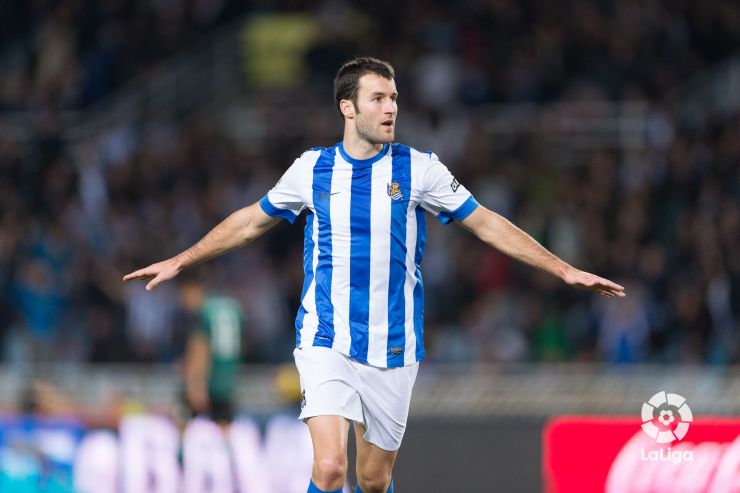 Agirretxe: "I really hope we can finish on a high note"

The Real Sociedad striker shared his thoughts on the derby against Athletic with LFP.es and analysed the team from Donostia's season.

Imanol Agirretxe (Usúrbil, Gipuzkoa, Basque Country, 1987) is one of Real Sociedad de Fútbol’s best-loved players. The 27-year-old will be one of the stars of the Basque derby this weekend against Athletic Club, with the team from Donostia fighting for fifth place and aspiring to beat their arch enemy four times on the trot for the first time in history.

LFP.es: How has the week before the derby been for the team?

Agirretxe: We're really excited and raring to go. It's very important for us, both in terms of points and because of what it means to win a derby.

LFP.es: How is the squad's morale after the draw against Granada CF?

Agirretxe: It was tough to take. When the opposition equalise and you lose two points it always hurts, but the team is recovering and focusing on the derby. It was a match that turned bad at the end, but we've put it behind us.

LFP.es: Both of you are in European spots, Athletic are looking to defend their record in the San Mamés and you are fighting for fifth place. It promises to be quite a show.

Agirretxe: Yes, in recent years we have both been up there and we're playing great at the moment. We would like to finish well. These matches are really special and, although they have nothing to play for in the table, we do. Also, the table doesn’t matter in a derby.

LFP.es: You have the chance to make history. Real has never won four consecutive derbies and now is your chance.

Agirretxe: Luckily the last derbies went really well for us and hopefully we can carry that forward to this weekend. Derbies are often more than just three points and winning one is a great feeling. Hopefully we can continue that streak and keep winning.

LFP.es: Are you surprised at Athletic's great season?

Agirretxe: It's clear that they have a great squad and have been really consistent. They've had a great season, that's why they've sealed fourth place with two matches to play. That tells you a lot about a team. It will be a tough match.

LFP.es: What is it like to be involved in one of those games?

Agirretxe: It is a really special experience. This year things will be a bit different because we won't have as many of our fans with us, but it's usually an incredible atmosphere. It's a pleasure and a real privilege to play in a game like this.

LFP.es: What is your fondest memory of a Basque derby?

Agirretxe: In last year's match when I scored and we won in their stadium (1-3). That was an important result for us in terms of our league position. That is a match I have stored away in my memory, but we've won the last three derbies against them, none of which I'll ever forget.

LFP.es: How would you evaluate the team’s performance this season?

Agirretxe: It has been a great season. We got through the qualifying stage and were able to play in the UEFA Champions League, which was an incredible experience. We were hoping to do better in terms of points and results, but it was still a fantastic experience. We reached the semi-finals of the Copa del Rey and in the Liga BBVA we have secured European qualification again. You'd have to consider it a successful season. Hopefully we’ll finish out what has been a great year on a high note.

LFP.es: What is it like playing alongside the likes of Carlos Vela and Antoine Griezmann? Between them they have hit the mark 31 times in the Liga BBVA.

Agirretxe: They're both really important players and they've scored bags of goals and won loads of matches for us this season. Real Sociedad is a hardworking, humble side that has a very strong core of players. Carlos and Antoine have contributed heavily this season. Having the two of them is great for us.

LFP.es: When you renewed your contract this season you said that ever since you were a young boy your dream was to play for Real Sociedad. What does putting on the Real jersey every week mean for you?

Agirretxe: Like I said, ever since I was young it has always been my dream to play for Real Sociedad. Now I have the chance to do it. I'm delighted with my contract extension, which means being able to keep playing for Real Sociedad and continuing to put on this jersey. Speaking honestly, I feel the same excitement wearing this jersey now as I did the first time I put it on. It is a great honour and makes me enormously proud. I want to continue doing this for a long time to come.

LFP.es: Ahead of this season's first meeting between the sides, your teammate Gorka Elustondo spoke with us and predicted it would finish 2-0, which ended up being the correct scoreline. Do you dare to make a prediction for this match?