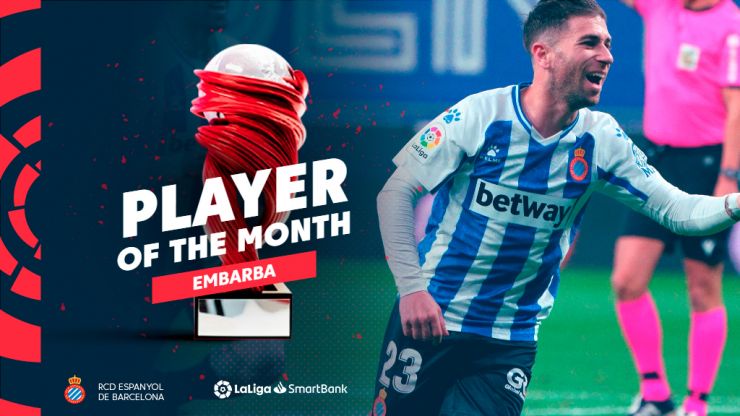 The RCD Espanyol frontman Adrian Embarba scoops up this award after scoring one goal, providing four assists and playing a vital role in the Catalan club's run of four games unbeaten in March.

Adrian Embarba has earned himself the LaLiga SmartBank Player of the Month Award for March. The Madrilenian maestro was crucial to RCD Espanyol's offensive charge in March in which Los Pericos managed to go four games on the bounce without succumbing to defeat.

The striker added one goal to his personal tally in the 4-0 win over UD Logroñes and served up a total of four assists: two against Logroñes, and the other two in the 2-2 draw against CD Mirandes and the 3-1 away win over CD Castellon on Matchday 31 of the competition.

Embarba has had a huge impact on the team, allowing Vicente Moreno Peris’s men not only to accumulate eight points out of the twelve up for grabs in March, but also putting them level on points with RCD Mallorca at the top of the table, sitting in the play-off places for promotion to LaLiga Santander.

Adrian Embarba was the pick of the bunch from among the other candidates up for the award: Uros Djurdjevic of Real Sporting de Gijon and Yuri de Souza of SD Ponferradina.