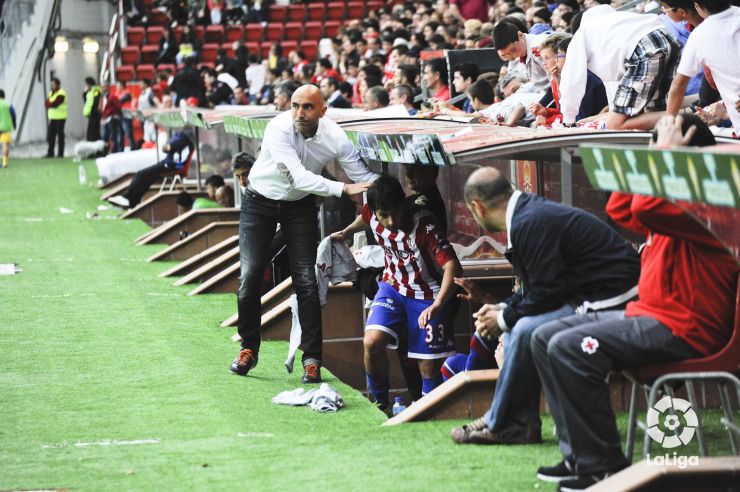 Abelardo: "Being the boss of Sporting is a great challenge"

After two games in charge of the Asturian side, their new coach spoke to LFP.es about the end of the Liga Adelante season, and what it means for him to sit on the Sporting bench.

Abelardo Fernández (Gijón, Asturias, 1970). From Real Sporting de Gijón centre back to sporting the colours of FC Barcelona and back again. A terrific career in domestic football has now extended to into management with the Asturian side; the club where he developed as a footballer has given him his chance as a manager.

LFP.es: How have the side developed since your arrival?

Abelardo: It's only been two games but we've tried to make the side more secure at the back, because they were conceding a lot of goals. In these two games we've conceded twice, but truth be told we didn't concede too many chances. From here we'll try to improve all facets of our game.

LFP.es: How is it to go into a game with Barcelona B, a club you know every well?

Abelardo: Like a final. It's going to be a very difficult game because we like to play a lot. They're having an outstanding season. They're playing very well, getting great results. They're third, showing they're a solvent side, therefore we'll try and make things uncomfortable for them, we're playing at home and will press high up.

LFP.es: Would you be disappointed if you don't go up?

Abelardo: Yes, it would be a bit of a disappointment to at least not play in the promotion playoffs. Sporting have had the chance to be right at the top all season, but for circumstance it hasn't worked out that way. I've taken over the side in promotion places, level with another two sides, and now we move forward, and the main thing is that we've got it in our own hands.

LFP.es: Sporting are a club with a tremendous history and a large fanbase. Do you think they needed someone local at the club?

Abelardo: I'm not sure. There's no doubts that since I arrived everyone has been behind the side. The other day at the Estadio El Molinón against Hércules CF the fans were incredible, we went 0-1 down and they lifted the side. The truth is that Sporting's fans will always be there and that's impressive. On Saturday hopefully a good number of them come down again, conscious of the fact it's the season's most important game. If we were to lose it would be a blow to our aspirations.

LFP.es: How does it feel to be a coach from the city of Gijón, in charge of your club?

Abelardo: It's incredible. Sporting is my team, I was born in Gijón and I learnt my trade as a player and coach here. Not a lot of coaches get this chance. For me, being in charge of this side is a great challenge, and if we were to go up to Liga BBVA, I'd be in dreamland.