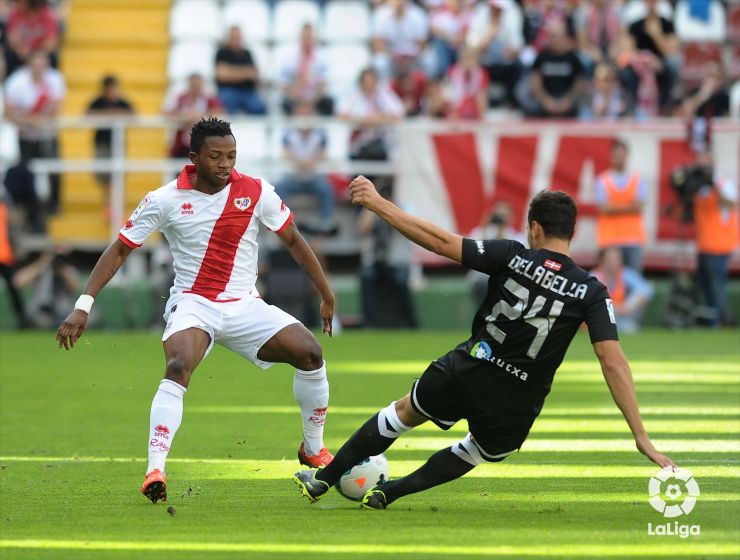 A win at the death for Rayo

Jonathan Viera made it 1-0 from the penalty spot in the 89th minute after an infraction by Claudio Bravo.

Rayo Vallecano beat Real Sociedad 1-0 in matchweek eight of the Liga BBVA thanks to a Jonathan Viera penalty in the 89th minute which was awarded after Claudio Bravo was judged to have fouled the Canary Islander. The Madrid side picked up its first win in a while after suffering six consecutive defeats, while the Basques have gone seven matches without tasting victory. The last time Real Sociedad won in the league was on the opening day of the season when the team beat Getafe 2-0

Carlos Vela had the first real chance of the game but his shot was put out for a corner by Rubén Martínez in the 17th minute. Rayo had chances of its own though, and was denied twice before the break by the visitor’s woodwork. Adrián González picked up a loose ball in the 28th minute only to see his strike bounce off the bar, while Joaquín Larrivey saw his header, which came thanks to a fantastic delivery from Lass Bangoura, come off the post in the 42nd minute.

Real Sociedad wasted two good opportunities in the second half to go ahead. Carlos Vela cut in from the right to find an oncoming Imanol Agirretxe, who scuffed his shot, and then Haris Seferovic did the same in the 80th minute after Antoine Griezmann teed him up well.

Just when it looked as though the match would finish as a stalemate, Viera was fouled by Claudio Bravo in the Sociedad box, and dually converted the resulting penalty past the Chilean goalkeeper to make it 1-0 in the 89th minute of the game.